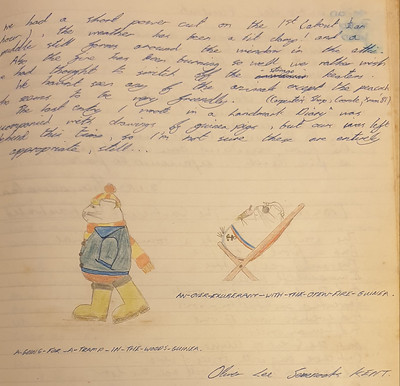 We’re currently holed up in a cottage in south Wales, listening to Storm Dennis howling outside. This is the bloke’s fortymumbleth birthday, so we’re following our tradition of going to a Landmark Trust (LT) property for the weekend.

LT properties don’t provide televisions or wifi, and are mostly in remote locations. A few years ago this meant you were properly cut off from the internet unless you were organised and downloaded a bunch of stuff onto your mobile devices before you left. Mobile coverage is now so good in 99% of places that this doesn’t work. For the adults, though, it helps a little with cutting screen time, since the main point of these weekends is sitting around the fire, snacking on all the tasty food we brought with us and plundering the bookcase.

Amongst my favourite items in the bookcases are the log books. My obsession with them began in the first LT property we stayed at, St Winifred’s Well Cottage, also in Wales. The log books there were things of beauty and frankly have not yet been surpassed. The artwork people drew and the little photos they stuck in were skilful and touching. Log books at subsequent properties have ranged from entertaining to mildly disappointing.

There’s an element of one-up-manship in most of the log book entries. For instance, “We walked 36 miles today and saw 8 different historical sites, even though it was pissing it down with rain! We observed 28 species of bird, one of which was the rare hoopentootle. PS Correction to the Thomas family entry on p36, Oct 1987: The notable feature in the Church of St Parpenfoogle is a cryptoporticus, not a cloister.”

I would like to start a tradition of one-down-manship. If I may suggest to future LT visitors the following:

This entry was originally posted at https://nanila.dreamwidth.org/1281192.html. The titration count is at