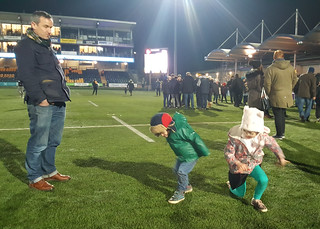 [The bloke watches as Keiki and Humuhumu charge madly around the pitch post-match.]

As a fun little follow-up to our visit to Bath, we took the children to watch the Worcester Warriors play Bath at the rugby this afternoon.

We were sat in the North Stand with a big group of noisy, loyal Warriors fans. This made for a great atmosphere, even though the Warriors' first half performance was rather unconvincing - poor kicking and butterfingers. The scoreline after 40 minutes was Warriors 3, Bath 19, which did not fill us with confidence.

The second half, however, was electrifying. A Bath player was sent off (red card) after a judoesque tackle. The Warriors woke up and began to claw their way back onto the scoreline. As full time came and went, they engaged in the first of an epic 18 scrums which meant that the game lasted an additional 19 minutes. I've watched a fair bit of rugby and I don't recall seeing many games that went on for more than a couple of minutes after the nominal 80. The series of scrums saw the teams use up all their substitutions and no less than three Bath players sent to the sin bin for various offences, which meant that by the end of the match, they were down to 11 players and only just able to contest the scrum.

When the Warriors finally scraped together the right play to drive the ball over the line, levelling the scoreline at 19, the crowd went wild. And when the conversion kick was good, securing the 21-19 win in the 99th minute, it was absolutely exhilarating.

We waited until most people had made their way toward the exits before walking down to the pitch, where they let the children on to run around and meet whichever players still have the energy to sign things post-match (not very many on this occasion!). Ours were mostly interested in tearing up and down and practising their tackling on each other. It's such a lovely touch, and a great way to get them to burn off their energy before having to enter the long slow car queue out of the stadium.

This entry was originally posted at https://nanila.dreamwidth.org/1223708.html. The titration count is at