My boss and I have begun the sad task of sorting through and either saving, re-purposing, or throwing out thirty-odd years of accumulated Cassini information. Today I found these newspaper clippings on my desk. He discovered them last night and thought I’d want them. He was right. 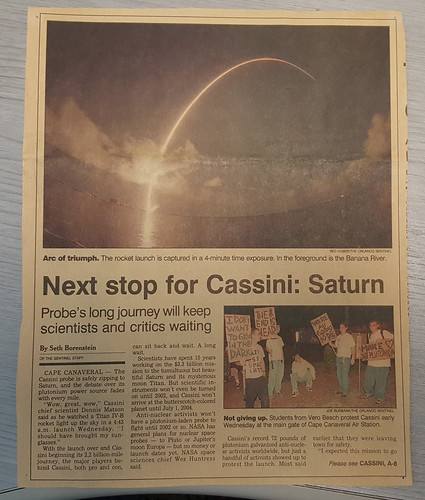 From The Orlando Sentinel, 16 October 1997. “Next stop for Cassini: Saturn: Probe’s long journey will keep scientists and critics waiting”

I didn’t know Cassini’s launch had attracted protesters due to its plutonium power source. Their signs...! “I don’t want to glow in the dark” is my favourite. I also wonder who sent these clippings to the MAG team, or if my boss had collected them himself. Must remember to ask him when he’s in next.

On a less sad note, here is an item that has been re-purposed! This is a mu-metal can, used to test magnetic field sensors. It isolates the sensor from the Earth’s magnetic field, so the sensor can be calibrated. This can was used when Cassini was being built, to test the Vector Helium Magnetometer (VHM). We will now use it in the lab to test the JUICE magnetometer sensors. 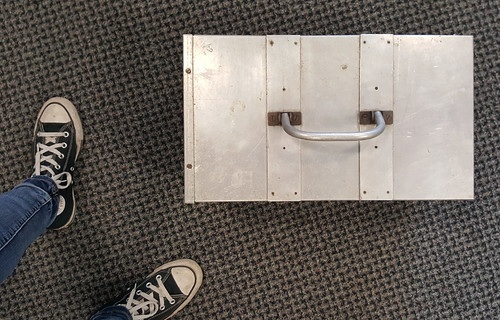 Mu metal can has a rather spiffy casing and even a handle to make it easy to carry (they’re heavy!). My feet included in the photo for scale.

This entry was originally posted at https://nanila.dreamwidth.org/1187054.html. The titration count is at