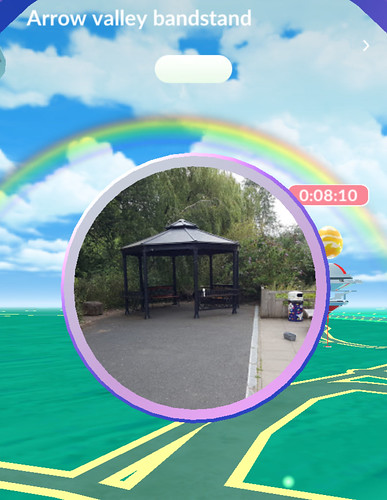 [Screenshot of a rainbow around a Pokéstop at Parkrun.]

I wish to shoehorn in this screenshot from our Pokéhunt at our (not so) local Parkrun, so a brief Pokégo progress update:


I have impending end of holiday lethargy. There are dozens of things I should do before I go back to work, but mustering up the will to do them is a herculean effort. I've just about managed bashing down the laundry Everest to a mere foothill, rearranging the wardrobe, essential shopping for the children, non-essential shopping for the children, and (with the bloke) figuring out what to do with the gigantic crop of courgettes which flourished during two weeks of neglect. So far, lentil & courgette dal in the slow cooker has been achieved. Tomorrow I'll make zucchini bread*, and courgette and potato soup to put in the freezer. I can probably fling the overgrown runner beans into that as well.

We got the car thoroughly cleaned. I had washed the children's car seat covers** after the mountain pass puke-a-thon but the full sparkle-shine service made it feel like even the faintest trace of vom had been banished.

In practical terms I'm fairly sure we're ready to go back to the usual routine. I can't shake the feeling that as soon as I go back to work, I'm going to be able to magically prioritise all the other things I should have taken care of whilst I was off, except I won't have time to do them.

* I still can't bring myself to call it "courgette bread". It just doesn't sound right.
** By hand because Center Parcs lodges don't have washing machines; all hail the cleaning power of Daz.
*** This is my attempt at phonetically spelling the Midlands pronunciation of "fight", which somehow has an "o" in it.

This entry was originally posted at https://nanila.dreamwidth.org/1186202.html. The titration count is at