Not at the same time. 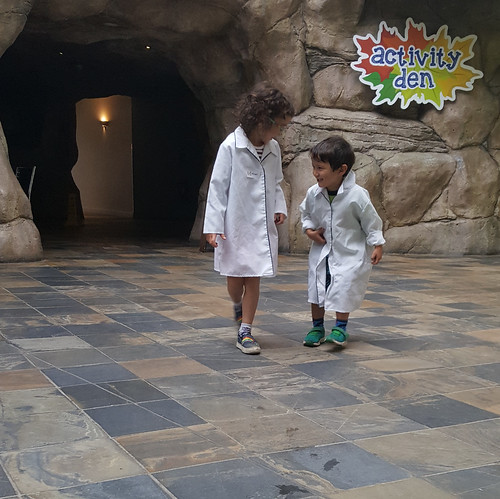 Humuhumu and Keiki in their lab coats. Sadly, that cave-like entrance leads to Bella Italia, not the Crazy Scientist lair.

First, the crazy science. Both children participated in this activity, donning white coats and heading into Crazy Scientist Jill's laboratory with quite a few other children. She began with a lesson in polymer strength (!), giving them each a plastic bag of "green alien slime" and having them stick sharpened pencils through it. Some bags leaked straightaway (Keiki's) and others could take multiple pencils without leaking (Humuhumu's), depending on how well the plastic was made. I really liked this demonstration although I suspect it went over my children's heads.

The second experiment was making a plastic container full of green bogeys. They started with corn starch, stirred that around a bit, and then added what looked like a scoop of baking soda and alum from a test tube. Jill came by with a kettle of recently boiled water and added that while they had their goggles on. Then she circulated with some "dragon breath" (green food colouring) and dropped that in whilst they continued stirring. Both my children loved this experiment. Keiki in particular, because (a) the resulting bogey mixture was bright green and (b) we got to close up the container and take the bogeys home. Happy days!

The third experiment was the classic making a volcano out of vinegar and baking soda. The children used construction paper and tissues to make a volcano "wrapper" for their plastic beaker of red-coloured vinegar, which the grown-ups helped them to glue on. And finally, everyone poured in the baking soda simultaneously. It was a joyously raucous affair.

Jill ended the session by letting each of the children use her time machine, which let them travel the solar system in search of planets and aliens. Humuhumu saw a rainbow alien at Neptune. Keiki was far too overwhelmed at being chosen to take the first trip in the time machine to speak at all, but it was clear he enjoyed it.

The time machine was a green circular paddling pool full of bubble mixture and a red hula hoop. Jill directed each child to stand in the middle of the pool and then she drew the hoop up over their heads to make a giant cylindrical bubble that encased them for a few seconds. The session was by this point running well over the scheduled hour, but clearly no one was going to leave before they had their go in it!

In the afternoon, Humuhumu and I went to try our hands at pottery painting. She chose a small mermaid to paint herself, and a dinosaur for me to paint for Keiki, with orders to make sure it ended up green, like Tony from Dinopaws (CBeebies show).

We pick up the finished pieces tomorrow afternoon. Fingers crossed they turn out OK.

This entry was originally posted at https://nanila.dreamwidth.org/1185124.html. The titration count is at