We had "only" two activities planned today, but somehow ended up all being completely zapped by 6 PM.

Humuhumu woke up early, so she and I had a quiet breakfast together and then headed down to one of the adventure playgrounds for a solitary morning play. She climbed everything she could reach, we caught a few Pokémon, and came back to wake the boys up.

We got ourselves dressed up for our professional photo session and went to pick up our hire bicycles. Humuhumu opted for one with stabilisers as she's not yet comfortable riding without them. She gained confidence with the bicycle over the course of the day, but given how hilly this site is, that was the correct choice.

The photographer took an array of photos of the four of us, and we're hopeful from the previews that we'll get some good ones. We have a handful of formal portraits of the children, separately and together, in the intervening time. However, the last time we had family portraits done was three years ago whilst on holiday in Turkey (see below). I'm resolved to get them done every summer from now on. 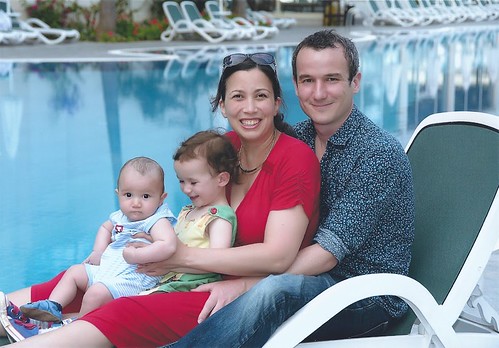 We went to a different playground so the children could blow off steam from all that holding still and smiling, followed by ice cream (them) and coffee (us). We cycled swiftly back to the lodge for lunch and a quick nap before heading out again to go swimming. Both Keiki and Humuhumu went down the slides with the bloke. Humuhumu even tried one of the flumes, a particularly twisty and fast water slide. I tried one of them yesterday and did not enjoy it so played with the children in the various pools.

Spending a little too long in the water meant we had to dash to the second pre-booked activity of the day: archery. Humuhumu did bows and arrows in Forest School in reception last year, so she was already pretty good at it and scored the most points out of all the children. Keiki seemed a little intimidated at first, probably because he was the youngest and also isn't used to being included in these things. Eventually he relaxed and started giving it a proper go, and he even hit the targets a couple of times at the end of the class.

By the time we'd cycled home we were all deliriously hungry and physically worn out, so it was pizza for tea. After I post, it will be beer o'clock and then sleep not long after, I reckon.

This entry was originally posted at https://nanila.dreamwidth.org/1184939.html. The titration count is at