When I did that meme in yesterday's post, it came to my attention that whatever LJ did to the Scrapbook some time ago completely messed up the links embedded in my old posts containing photos of my paintings.

I've managed to retrieve some of the photos and popped them in an album on Flickr so I have a record of them. This made me recall that a fair few of them are now in the possession of friends, some of them thousands of miles away, and thus I become even more annoyed with LJ for "disappearing" a random assortment of the high-res versions. 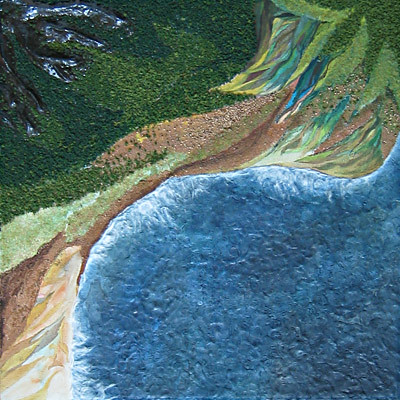 This is titled "Home" and is drawn from my memories of the Big Island (Hawai'i), which I visited from Oahu as a child. It's the first one I did after moving to London. Hangs above the stairwell in our house.

I should very much like to get back into painting, as all of these were executed well before the children were born.

This entry was originally posted at https://nanila.dreamwidth.org/1160612.html. The titration count is at