This morning dawned gloomy and rainy and could only be salvaged with the application of oceans of coffee and pancakes (fluffy American style ones, made by me).

Then we took the older children (Humuhumu and Nephew) for an hour-long session at the small climbing gym at the local sports centre. Humuhumu has been begging us to go for months. She was, as expected, quite good at it. She got to the top of five of the seven routes she attempted. She made it halfway up the sixth, and the only one she failed to get much off the ground at was, we were told, the most difficult one in the gym. She wants to go again during half-term, presumably so she can demolish the routes she didn't try.

As we left, the clouds parted, and I drove us all home with the sunroof open and Grimes blasting on the stereo. Everyone changed into short-sleeved tops and sunglasses, and we spent the rest of the afternoon outside lolling in the sunshine, playing boules, having fancy drinks with ice in, putting up the tent, and firing up the barbecue. 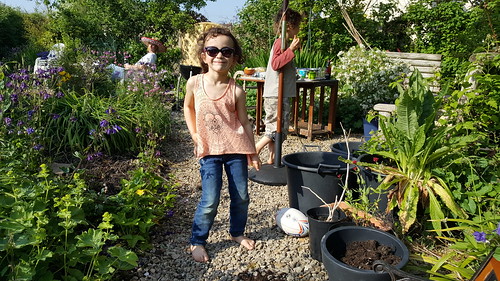 Humuhumu dancing to David Bowie. Uncle in inexplicable sombrero lounges in the background. Nephew gyrates around the umbrella pole whilst stuffing strawberries into his face as fast as possible.

Overall: 10 out of 10, would bank holiday Saturday again.

This entry was originally posted at https://nanila.dreamwidth.org/1157248.html. The titration count is at