As I have alluded to in the past few posts, we spent the Easter holidays in a Landmark Trust castle in Yorkshire. Staying in an LT property has become our traditional way to celebrate the bloke's birthday, which is in February. We opted not to celebrate in February this year, given that his birthday (a) did not fall over the half-term break and (b) involved him flying home from Kuala Lumpur on the day. We also figured out that the three-night stays were consistently feeling too short to relax properly, so we went for five nights.

The first installment of the photos shows the exterior of the castle. Castle Cawood has existed in various forms since the early 12th century. The gatehouse portion was constructed by Archbishop Kemp. The castle was ordered destroyed in the 17th century by some grumpy Roundheads. 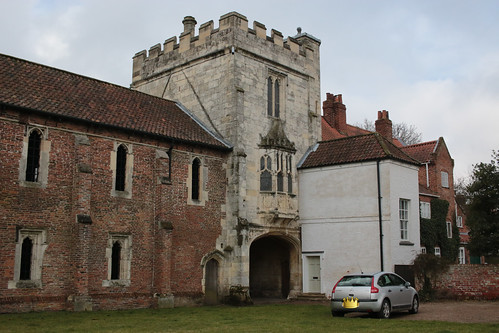 Castle gatehouse (stone) with our car parked in front of it, and abandoned banqueting hall (brick). Access to the weathertight (but not habitable) banqueting hall was possible although you had to find the keys first.

This entry was originally posted at https://nanila.dreamwidth.org/1142961.html. The titration count is at