Background information: I work in one of the groups that's a Principal Investigator (PI) institute for the JUICE mission. This L-class (where L stands for "Large") spacecraft has a launch date of 2022, and will travel to Jupiter to study the Jovian system. The spacecraft will be the first ever to orbit one of the Galilean moons. The chosen target is Ganymede, as it has both a subsurface ocean, like Europa, and its own intrinsic magnetic field. It is the only non-planetary body in the solar system known to produce a permanent magnetic field.

Our institute is providing most of the hardware for one of the scientific instruments on board the JUICE spacecraft. We are building most of the electronics and one of the sensors. We also have two hardware-providing Co-Investigators (Co-Is), one in Germany and one in Austria. Our German colleagues have been producing similar sensors to us for about the same number of decades, and their design, like ours, has a great deal of space heritage.

Our Austrian Co-Is, on the other hand, had none.

Their sensor went into orbit around the Earth on a Chinese spacecraft last month. I wrote about it here. The boom on which the sensor was mounted was successfully deployed and the instrument was switched on into test mode.

Last Saturday, the sensor went into Science mode for the first time and measured the Earth's magnetic field. I reproduce Andreas' tweet on the subject below: 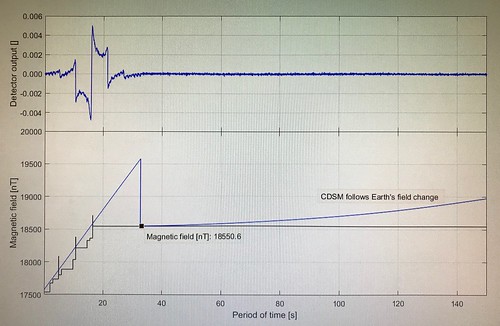 18550,6 nT. Today for the first time ever, a Coupled Dark State Magnetometer measured the magnetic field in space. The result of 11 years of development by @iwf_graz/@oeaw and the Institute of Experimental Physics.

Why does this matter so much to us? Because this sensor forms part of our JUICE instrument as well. We are extremely pleased that it works!

This entry was originally posted at https://nanila.dreamwidth.org/1134962.html. The titration count is at