This will be a quick entry because the emergency plumber is here (more on this later), but just wanted to document a day that has been rather more chock-full of excitement than any of us had hoped.

Humuhumu and I dropped off Keiki and bloke at pre-school and the train station respectively. We then took the car through the automated car wash, a trip that was about four months overdue. Humuhumu narrated the experience continuously. We betook ourselves to the supermarket to purchase necessary supplies, including a birthday cake for bloke (more on this below the cut). After dropping the groceries at home, we turned straight around and went to the hospital for a very long eye appointment. Humuhumu had her usual check-up and then we saw the senior consultant orthoptist so she could get her new prescription. This involved putting drops in her eyes to dilate her pupils and waiting for half an hour. Because her eyes are so dark, she ended up having to go through this procedure twice. She was very good about it, and about having fifty different bright lights shone in her face. The consultant was so impressed with her behaviour that she got four stickers, including two special shiny ones.

We walked into town. Again, she was very brave about this, because for once the sun was shining and it was right in her poor sensitive eyes. She kept her head down and her hand in mine, and I guided her to the opticians. She picked out two pairs of new frames, one for her everyday pair and one pair of sunglasses. They'll be ready in just over a week.

Both of us were hungry, so we decided to be Ladies that Lunch at a nearby pub. Sausage, chips and peas for her, and chilli and rice for me. She drew a picture, and then we looked at all the Pokémon in my Pokédex. She giggled a lot about the Spoink flipping over. 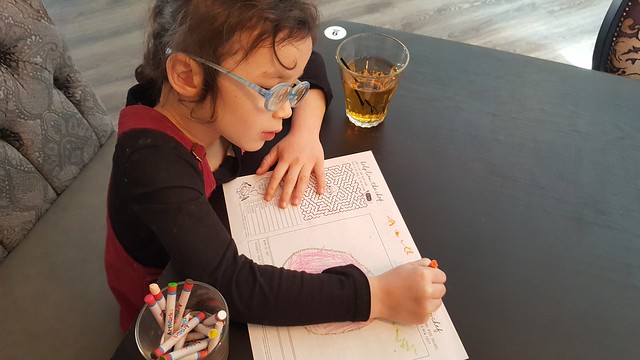 After lunch, we went and got her passport photos taken. We rounded off our trip into town with a visit to the stationery shop, where we replenished our coloured card supply and got some stickers. Then we headed home. 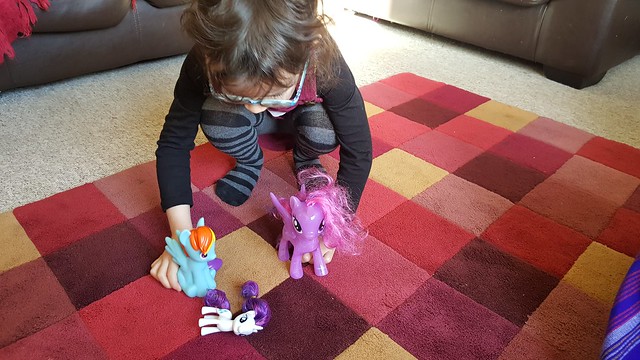 Because she'd been so good, she got to open up her new (My Little) Ponies, Rainbow Dash and Rarity, to join her beloved Twilight Sparkle.

We had a little time to chill out together and make the bloke a birthday card with the new stickers before we headed out to pick him and Keiki up. Before we did that, I noticed that the small leak that a downstairs radiator had sprung just a couple of days ago had turned into a more serious dribble. The ice cream tub that I'd been using to catch the drips, and had been filling about once every twelve hours, was nearly overflowing after 45 minutes. I texted the bloke that we'd need to do something about it when we got home, and we should not forget to empty the tub as soon as we walked in the door.

I emptied it first. The bloke went to do it the second time after he'd finished his supper. (The rest of us were still eating.) Suddenly, he swore, and then shouted for a bucket. The hot water pipe had burst. The kids and I lost our heads and started dashing about getting in one another's way. Eventually we sorted ourselves, and several tubs/buckets out, and the bloke managed to get the pipe jammed back in temporarily, though he couldn't move. I asked the children to go upstairs and play while we figured out what to do. They went up to their room and made up an adorable camping-out game with their torches and treasures, and stayed there until I came and got them more than half an hour later. (BEST CHILDREN EVER, I tell you.)

I have had more than one occasion on which to be grateful for purchasing emergency boiler & heating system repair cover in the past five years, but this particular incident tops the list. We were told the plumber would show up "any time between 7:30 PM and 6 AM". He arrived at 8:30 PM.

Once we'd got the pipe jerry-rigged into place, we were able to light the candles on the fantabulous birthday cake that Humuhumu had chosen.

Our exchange at the supermarket had gone like this.

And now that the emergency plumber is leaving and the children are asleep, it is definitely time for a beer.

This entry was originally posted at https://nanila.dreamwidth.org/1129783.html. The titration count is at