Humuhumu is going through a phase where she asks me whether or not things are real. I have thus far resisted the urge to reply with opaque philosophical responses, or "Yes, everything that happens in your mind is real; it's all real; THE HORROR". Ahem. For instance, over breakfast, she will ask, are the Octonauts real? No, I regretfully reply, but all the creatures they meet in the ocean are real. Let's watch Blue Planet II. And then she and Keiki are delighted when they recognise a good proportion of the animals. Orca! Humpback whale! Bottlenose dolphin! Mantis shrimp! Vampire squid!

Speaking of vampire squid, one of her current favourite books is Hugo Makes a Change, which we bought at the Ikon Gallery bookshop in Birmingham a few weeks ago. Hugo is a meat-loving vampire who discovers that vegetables are delicious. If you thought the fluff-ification of pirates for children was bad, you have clearly not been keeping up with the trends on vampires. One of her other literary favourites is Amelia Fang and the Barbaric Ball, of which we've been reading a chapter a night. Amelia has a pet pumpkin called Squashy and her favourite food is falafel.

Anyway, last night when the children were having their bath, Humuhumu asked, "Are vampires real?" No, I replied, they're not. "Oh," she said. "Mummy, why aren't they real?"

So I said, "Well, the typical vampire myth goes like this: A vampire only drinks blood. Vampires get hungry every night, and they have to bite someone and drink their blood. Then the person they've bitten turns into a vampire. This is a problem."

Humuhumu: "Why is it a problem?"

At this point the children have gotten very excited and are chanting "vampires" along with me every time I say "vampires". I get all the way to four thousand and ninety-six vampires and I try to stop. "MORE", they demand.

In the end, I have to go all the way to a million and forty-eight thousand vampires (I started rounding, so sue me) before I'm allowed to stop.

"So you see," I conclude exhaustedly, "in a little over a month, everyone in the world is a vampire, and that doesn't work, does it. You're not a vampire."

"No," she agreed regretfully. "But I can pretend!"

Yes, yes she can. 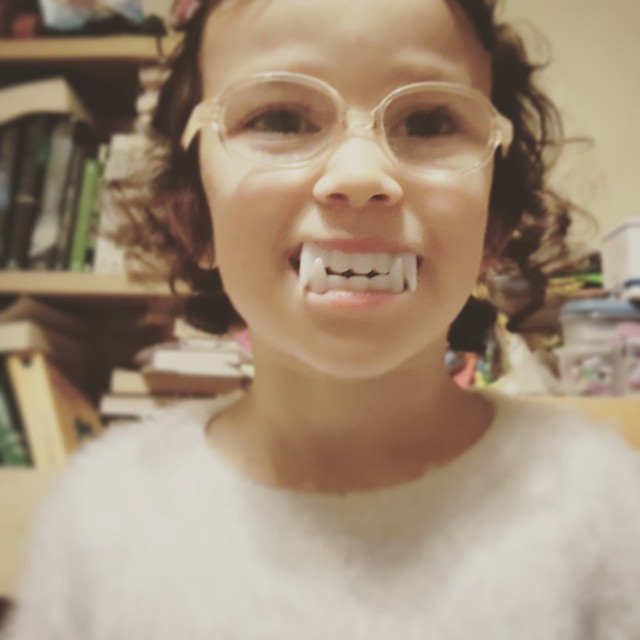 This entry was originally posted at https://nanila.dreamwidth.org/1111177.html. The titration count is at