Thursday was meant to be a quiet day, since we all knew we had to be up and at Caltech by 4 AM for the thing we’d all been preparing for: the actual end of mission.

In reality, there were some impromptu science meetings at Caltech, one of which I attended in the morning. I slipped out just before noon, because I had someone to meet.

I headed down from Beckman to South Mudd to see my former JPL postdoctoral supervisor, from back in those heady days when I was still a lab scientist, for lunch. I hadn’t seen him since 2006. I eventually remembered where his Caltech office was. I could’ve found the JPL one much more easily, but it would have required me to check in and get a badge, which seemed a lot of faff for lunch. Besides, there are nicer places to eat in Pasadena. Once in the correct corridor, I spotted his technician hovering outside the door, plus another UK person from the physical chemistry community whom I’d never met but knows the bloke pretty well. There were lots of smiles and hugs, and we decided to head down to a restaurant over on Lake Street.

We had a very pleasant hour of conversation, reminiscing and catching up. I had a shock on hearing that their children, whom I remembered as children or young teenagers, were now grown up and had careers of their own. Of course I knew that would have happened in the intervening decade-plus, but it’s not until you actually speak together about these things that they’re driven home to you. They were equally shocked on learning that Humuhumu has started school - and has a younger sibling! The bloke and I had been remiss in our communication, clearly. We talked of science, of course, and of politics and its effects on research direction, and of our worries about the future due to Brexit and the current US administration.

I am still kicking myself for forgetting to take a photo. You must instead picture me with a group of men: one starting to disappear into the frailty of old age, peering out earnestly from large-framed glasses, one solid and grey-haired and mostly silent with twinkling blue eyes, and one cheeky-grinned middle-aged bear of a chap with a shock of brown hair and a beard. All sitting together in a booth of a Japanese restaurant, eagerly shoveling the contents of bento boxes into our faces, occasionally bursting into roars of laughter while cheesy ‘90s music played in the background.

We parted with promises not to let another eleven years pass before we met again. I was left with the warm glow you get from (re)connecting with friendly, kind, intelligent people. It was a lovely way to buffer against the excitement and strain of what was to come on Friday morning. 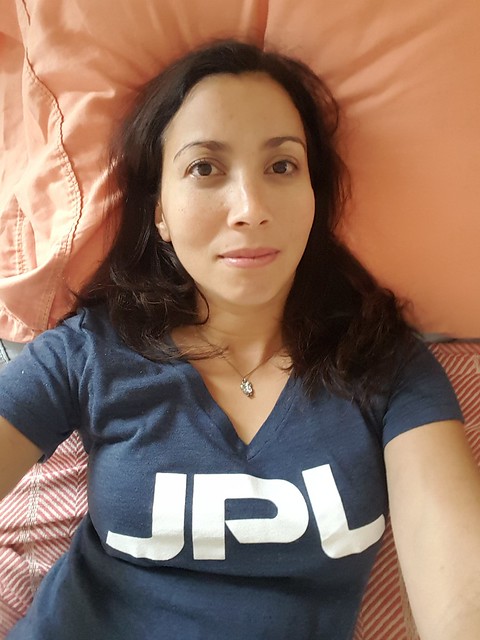 Chilling out in my JPL t-shirt before the end of mission.

This entry was originally posted at http://nanila.dreamwidth.org/1105066.html. The titration count is at