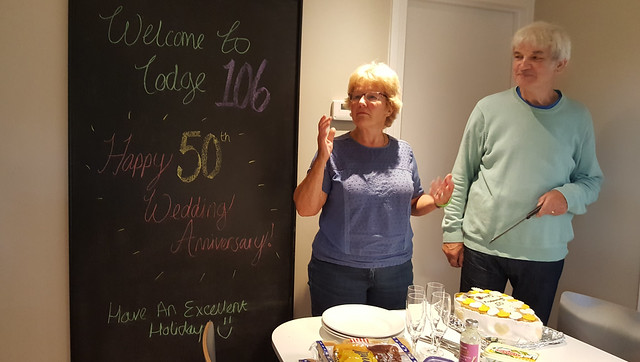 The bloke’s parents with their heart-shaped homemade cake. The chalkboard next to them colourfully reads: “Welcome to Lodge 106. Happy 50th Wedding Anniversary! Have an excellent holiday. 😊”

A couple of weekends ago, we went to a Center Parcs with the bloke’s family to celebrate his parents’ 50th wedding anniversary. Each family stayed in separate lodges, and we joined together for lunches, activities, tea and evening meals.

Going to a big resort-type thing in a forest in the school holidays seems to be a rite of passage for English children. Everyone else in the family (actually being English) had this innate understanding of how things were going to work and what was going to happen. I, on the other hand, was completely in the dark. I didn’t know that the “swimming pool” was going to be a massive indoor waterslide park with separate areas for children of all ages, for instance. Or that bringing our bicycles was not just so we could get some exercise, but so we could pop out to the shop for some milk for five minutes rather than have to walk for half an hour. The place was gigantic and – it being the start of the summer holidays – completely full.

The wildlife, being accustomed to the presence of humans, was very nearly tame. If you left the sliding door to the patio open, the ducks would waddle confidently inside in search of whatever food you had foolishly left out. The squirrels would take nuts from your hands. The muntjac deer would walk up to the patio door and stare in, and not run away until the toddler came outside and tried to pet it.

We had a truly typical British summer holiday experience in that it rained nearly the entire time, so we spent a good amount of time in the water park. Humuhumu was, at first, slightly afraid of the water slides. Subsequent to our first trip to the water park, we bought her some goggles and that flipped the switch. We couldn’t get her off the water slides after that. She went round them so many times that when we went to the changing room to get back into our clothes, she could barely stand, she was so exhausted. I only got the chance to try the water slides once for about ten minutes (during which Keiki apparently screamed for me the entire time), so I went for the biggest one (twice): the Cyclone, which you went down on a rubber raft in a group. I got to go with my niece and her mum, aka the bloke’s sister. I shrieked like a banshee the whole way down. It was fantastic.

Despite the filthy weather, we managed to sneak in some outdoor activities. We played boules. We climbed around the adventure playgrounds. I took Keiki to the pond, where the nearly tame baby moorhens nibbled at his wellies, to his boundless delight. We also found a peacock, with whom Keiki had a half-hour conversation. I turned my back on him briefly and when I looked at him, he had moved close enough to the peacock to stroke its tail feathers. The peacock held itself very still, almost as if it didn’t want to frighten him, when really it should have been the other way round.

The wedding anniversary celebration came off very well indeed. There was a huge, heart-shaped and delicious sponge cake, baked by the bloke’s sister, and a “cheese cake”, which was a mountain of stacked cheeses. The bottom layer, an enormous squishy brie, had to be served separately because it would have collapsed under the weight of the wheel of harder cheese above it. This was not a problem because we devoured it over the course of two days. Most importantly, the bloke’s parents had a wonderful time being surrounded by, but not in the pockets of, their children and grandchildren.

Further photos below the cut, including a series titled “Keiki Points at Things”.

This entry was originally posted at http://nanila.dreamwidth.org/1098213.html. The titration count is at