August is, apparently, the season for Certificates of Appreciation in spacecraft engineering!

First up is the one for Solar Orbiter. 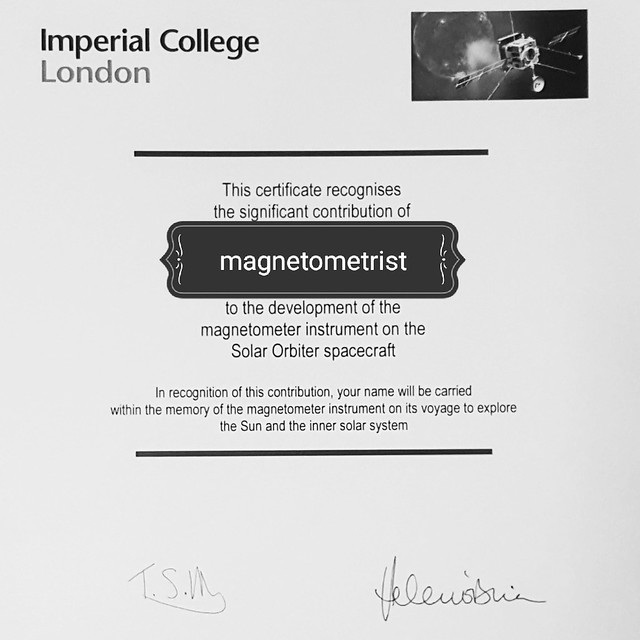 This has an image of the spacecraft approaching the Sun in the upper right corner. It reads, “This certificate recognises the significant contribution of [nanila] to the development of the magnetometer instrument on the Solar Orbiter spacecraft. In recognition of this contribution, your name will be carried within the memory of the magnetometer instrument on its voyage to explore the Sun and the inner solar system.” It’s signed by the instrument PI (Principal Investigator) and instrument manager (my fantastic colleague and labmate Helen).

My name’s going to the Sun! (TBH I’m glad it’s just name. It’s a bit...lethal-radiation-y out there.)

Second is the one from Rosetta. 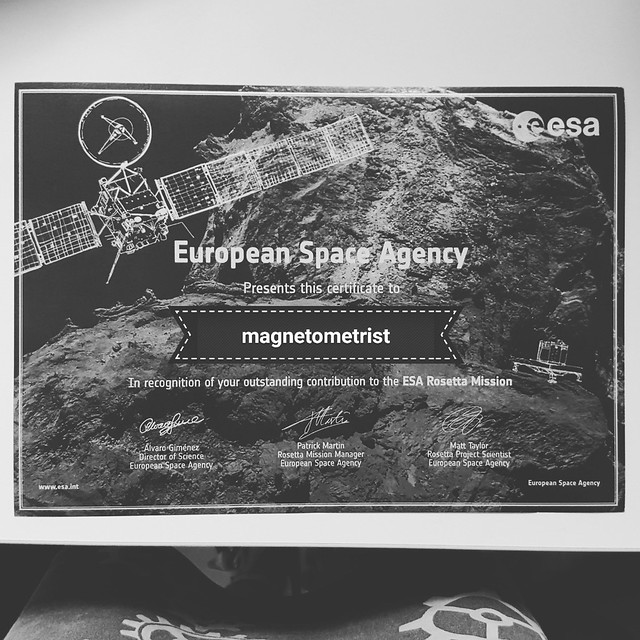 This as, as its backdrop, a stunning close-up image of Comet 67P taken by the OSIRIS instrument. There’s a sketched Rosetta spacecraft in the upper left corner, and a sketched Philae in the lower right. It reads, “European Space Agency presents this certificate to [nanila] in recognition of your outstanding contribution to the ESA Rosetta Mission.” It’s signed by the Director of Science at ESA, the Rosetta Mission Manager and the Rosetta Project Scientist.

Finally, here’s an old one from the Cluster and Double Star anniversaries. 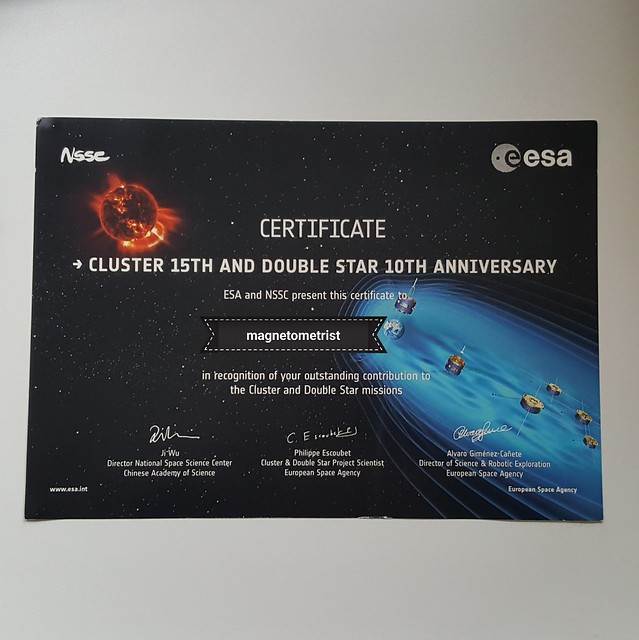 This one has an image of the Sun and the Earth (not to scale), as well as the Earth’s magnetic field in blue. The four Cluster spacecraft are in formation at the bottom right and the two Double Star spacecraft are closer to the Earth. Also not to scale (“These are small and those are far away”).

The certificate reads “Cluster 15th and Double Star 10th anniversary. ESA and NSSC present this certificate to [nanila] in recognition of your outstanding contribution to the Cluster and Double Star missions.” It’s signed by the Chinese National Space Science Center director, the Cluster & Double Star project scientist and the Director of Science & Robotic Exploration at the European Space Agency.

The Cluster mission is now in its 17th year since the commissioning phase ended and still going strong. The Double Star spacecraft are no longer operational.

I’ve worked on the Cluster mission since 2006.

This entry was originally posted at http://nanila.dreamwidth.org/1097708.html. The titration count is at