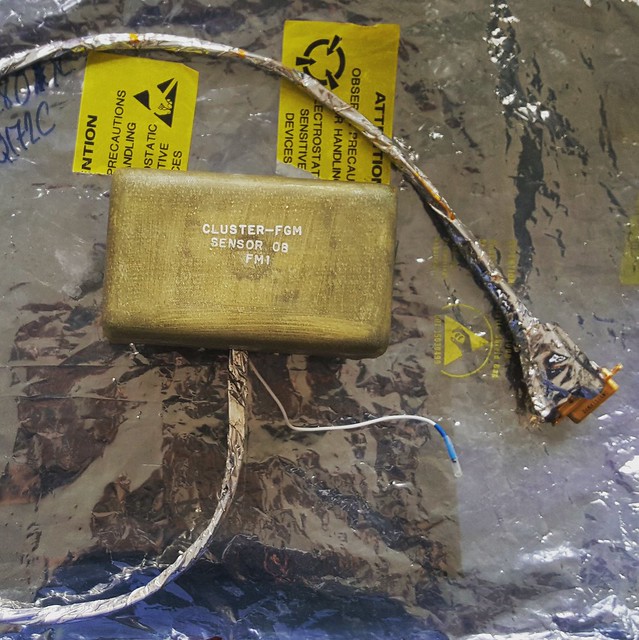 [Image of a fluxgate magnetometer in its housing with its frayed MLI-coated cable curled round it. The destroyed connectors can be seen. The whole assembly is sitting on top of an antistatic envelope. The sensor housing reads: "CLUSTER-FGM SENSOR 08 FM1", where FM means "flight model".]

I gave an outreach talk at an open day this morning, to about a hundred A-level students, their parents and their teachers. The talk was focused on the Cassini end-of-mission science, but I managed to sneak in this bit of space history when explaining what a magnetometer does.

The fluxgate in the photo above actually went into space for a few brief seconds. It got about 5 km up before it was unceremoniously returned to the Earth. The Ariane 5 rocket that launched the spacecraft whose payload it was part of had exploded, showering the swamps of French Guiana with wreckage.

This sensor sat in that swamp for a good few weeks before a French Foreign Legionnaire fished it out.

I'm afraid that being blown up and mouldering in a tropical pond was, in fact, enough to kill it, but it's still a pretty cool object, and the students seemed to like seeing it very much.

This entry was originally posted at http://nanila.dreamwidth.org/1093636.html. The titration count is at