I'm frantically trying to finish a bunch of work before I go on holiday for two weeks in July, so time for blog is very limited. I'm hoping to have lots of leisurely catch-up time to post things like photos from Vienna and Spain.

Worst thing that happened today: I forgot my glasses on the counter by the mirrors in the ladies' toilets at Birmingham New Street Station. I realised this at exactly the moment my train to London was moving away from the platform.

Best thing that happened today: I received an e-mail alert titled "hggggggfgfg", which I assumed meant, "ALERT: Engineer's Cat Has Walked Across Their Keyboard." It was later claimed that this alert was issued because of "testing", which I can only mean "testing for robustness of cat-proof-ness", a test which the system has surely failed.

In conclusion, I give you the most recent studio portraits that nursery had done of the children (late April). 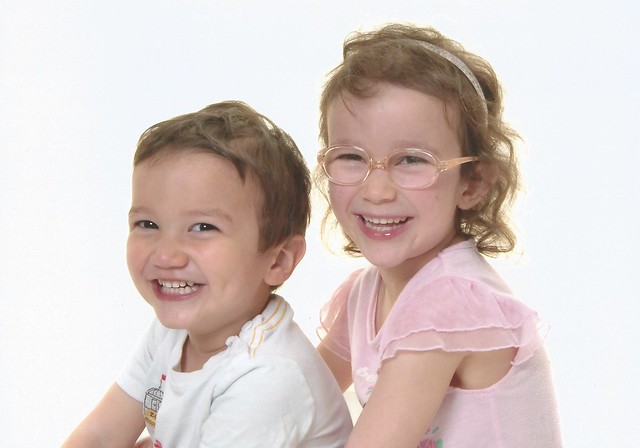 [Studio portrait of Humuhumu and Keiki smiling together. Humuhumu has her peach-framed glasses on.]

This entry was originally posted at http://nanila.dreamwidth.org/1093233.html. The titration count is at