...so here, have a photo from yesterday evening instead of hearing me moan about that. 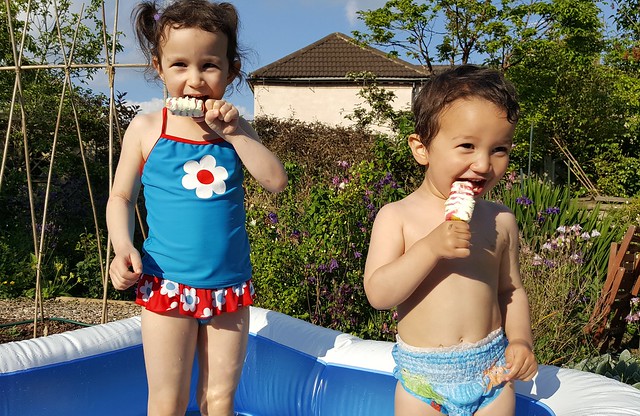 This entry was originally posted at http://nanila.dreamwidth.org/1087850.html. The titration count is at

Back story: The garden behind our house is a very peculiar shape. It is quite wide at the back of the house for about 10 metres, then narrows abruptly to a very skinny path alongside the canal towpath hedge. It goes along like this for about 5 metres and then ends in a round, fenced-in patch about 4 metres in diameter. The round patch has a concrete pavement in a pretty circular pattern.

We’ve been trying to work out what to do with this odd space since we moved in. It’s a fair way from the house and not visible from the back door. Jacuzzi? Too much maintenance, plus it’s too far to trek on a horrible winter night. Bike shed? Functional but boring, and also bike sheds are ugly. This is a pretty space, ringed by climbing roses and vines.

A few weeks ago we went to the garden centre and found a display of cute playhouses with trimmed roofs and windows, and an interior upper floor reached by a child-sized ladder. The 6’x6’ models were on sale. As we had to carry the children away from them, literally, we thought, perhaps this is the optimal use for that round patch.

Thus far, we have been proved entirely correct, and the expense has been justified. Since it’s been installed, both children come home from nursery, dash through the house and out the back door into the playhouse to draw, play on the tablet or just run up and down the steps and in and out the doors. (There’s an adorable toddler-sized door out the side in addition to the larger front door.) The only things that brings them back to the house in 15-20 minutes are the requests for drinks and fruity snacks, which are then carried back up to the playhouse.

tl;dr version We got the kids a playhouse for the garden. Photos below! 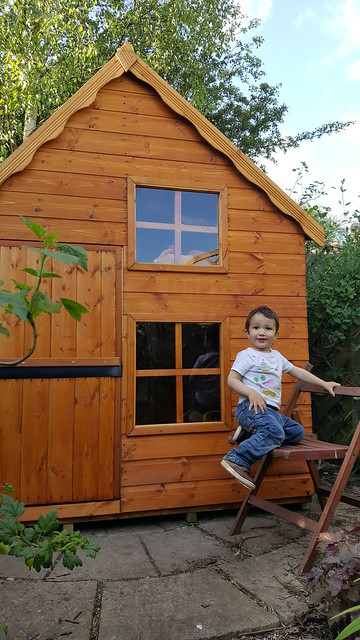 [Keiki on a wooden chair outside the playhouse. “Oi* shut da door on moi sister!”]

* The Black Country is strong with this one.
** There is a whole separate post brewing about how I simply do not understand Danger Mouse.

This entry was originally posted at http://nanila.dreamwidth.org/1088111.html. The titration count is at