All photos taken with my phone - we brought no luggage apart from our rucksacks & I didn't have space for the dSLR. Quality is variable, especially since Aviary on Flickr is still not working so everything is SOOC.

Last weekend, Humuhumu and I had our first mini-break together.

I picked her up from nursery slightly earlier than usual and we took the train to Birmingham International. We had our tea in the airport. The server behind the counter took a shine to her since she asked ask so politely for her hot chocolate, and presented her with an absolute mountain of whipped cream. Apart from that, her dinner consisted of an apple, carrot juice and an oatmeal bar. 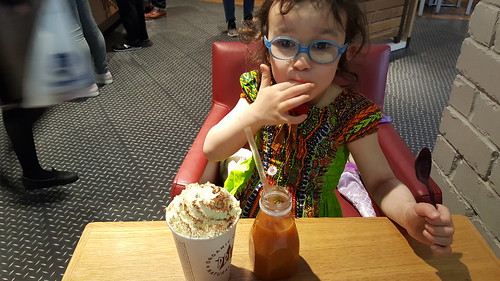 Slightly unbelievably, we ran into some cousins who live in Cheltenham and were flying to Mallorca for their Easter holidays. Humuhumu was growing tired – it was nearly 8 PM – so spent a lot of the conversation cuddled up in my lap with her blankie.

We boarded the plane. Humuhumu’s disappointment at the lack of films on the plane (it’s a 45 minute flight) was mitigated by being given free reign over the tablet.

Once we’d landed in Dublin, it took about 30 minutes to get through a second immigration check. While we waited in the queue, we were treated to a rant on the subject of unhelpful security measures by the elderly Irish gentleman in front of us, who was fervently pro-freedom-of-movement. It was rather lovely.

We skipped through the airport and into a taxi. The taxi driver was listening to a programme called “Leap of Faith”, to which Humuhumu promptly fell asleep. I listened quietly as they discussed the results of a survey on the church-going practices of Dublin-dwellers. I giggled when they thanked the 2,130 respondents who said they belonged to the Church of the Jedi Knights. The taxi driver said, “Oh, you were listening, were you?” in some surprise. “This isn’t the same country I grew up in, I tell ye.”
“And is that a good thing?” I asked.
“Oh yes,” he said. “It is. The way it used to be, with the church…” he shook his head. “Too many young lives ruined.”
He got a disproportionately large tip.

emelbe met us in the lobby. We headed promptly up to our room, as Humuhumu was blearily trying to process 10 PM. While she snuggled down into her bed,

The next day dawned bright, sunny and warm. We went down to the hotel buffet and discovered they had a magical pancake-making machine. Pancakes with Nutella and maple syrup were duly consumed.

We headed outside with the Leprechaun / folklore Museum in mind as our destination, via parks and playgrounds. It took us over an hour to reach the Museum, where we were told (and good on them for it, too) that it was not suitable for children under seven. Having failed at culture, we opted for shopping at the Penney’s mothership, where we discovered sproingy hair bobbles and Finding Dory colouring sets. 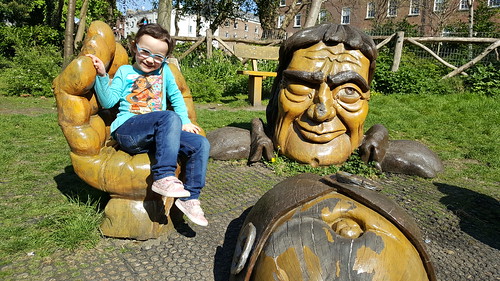 [Humuhumu in the hand of the giant at the Giant’s Playground.] 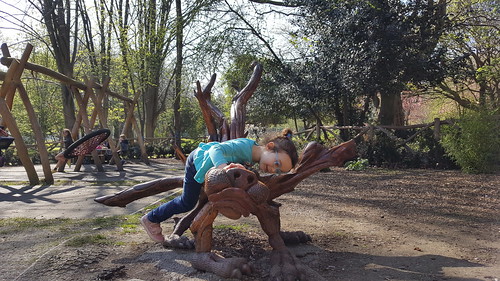 [Humuhumu clambers over the dog-insect-thing] 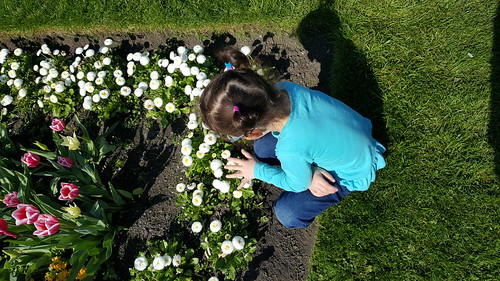 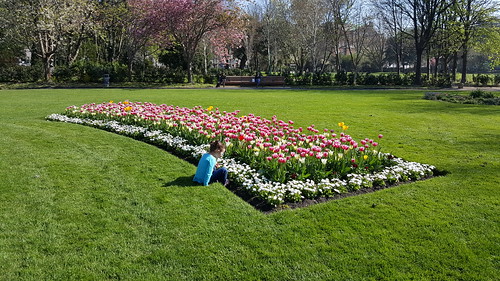 [Humuhumu inspects the flower beds in a park.]

We walked back over the river Liffey and into Temple Bar so we could go to Gallagher’s Boxty House for lunch. Humuhumu had the “child-sized” portion of fish and chips. It was enormous. I had the stew and 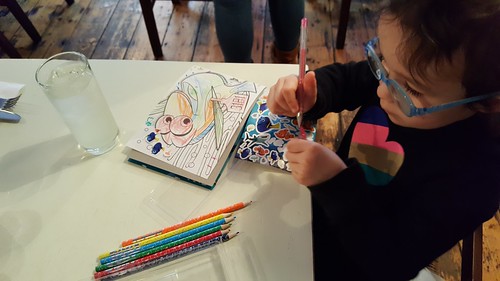 [Humuhumu colours in Dory before our lunch arrives.]

We waddled outside an hour later stuffed to the gills and headed through the Saturday 3 PM crowds (who were 9 PM levels of drunk already) to find our route blocked by a large protest about water tariffs. Detouring around it, we arrived at our destination: the Natural History Museum, aka the display of truly alarming taxidermy. Humuhumu: “It looks like the scary lady’s room in Paddington!” (Scary Lady == Nicole Kidman’s character, who wants to stuff Paddington.) We investigated the displays for about 45 minutes whilst

emelbe went to buy whiskey and to the Archaeology Museum to get postcards.

We returned to the Giant’s Playground. Thorough sun-baked and tuckered out, we meandered back to the hotel, where we flopped out until dinnertime, which ended up being smoothies at the hotel bar because we were still full from lunch. 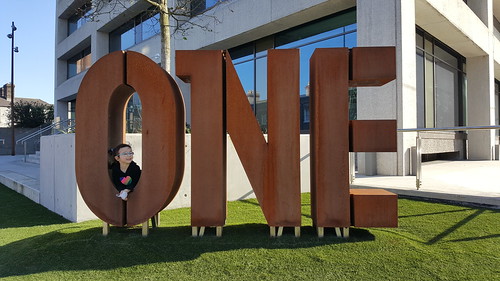 [Inexplicable corporate art is also for playing on, yes yes?]

Humuhumu went fairly easily to sleep in my arms, as did I. I managed to rouse myself briefly to taste the bourbon

emelbe had brought for me to sample, but bedtime was still pretty early.

The next morning was significantly cooler and cloudier, conforming more to expectations of Dublin in April. We took our time in rising and going to breakfast, checking out at the last possible moment. Even with that we were still too early to check into the canal barge where

emelbe was to spend the rest of her holiday. We strolled up the quayside and stopped off for a pastry and tea at Il Valentino before going to the docks.

As soon as we met the barge owner, I knew I'd made a tactical error in going to the hotel. I had been afraid to stay on the water because Humuhumu can't swim. It turned out that the barge was both firmly affixed to the docks and could be locked securely. Also, there was space for Humuhumu to play, and games and toys for children. Lesson learned.

[Panoramic view from the back of the barge.] 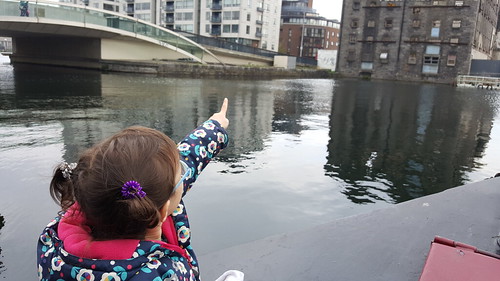 [Humuhumu pointing out the seagulls.]

We spent the afternoon playing and talking.

omniana, whom I haven't seen in 8 years, came by. We drank tea, ate apples and caught up on one another's lives while Humuhumu and I coloured in Finding Dory pictures. 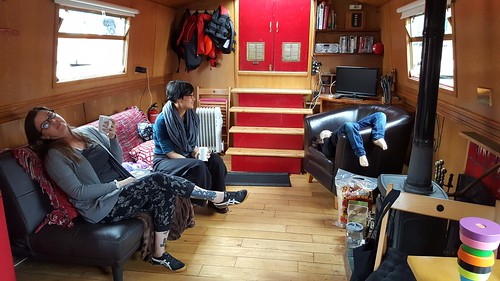 [Lounging on the barge.]

Hours flew by and then it was time to get back in the taxi to the airport. After the short journey back to Brum, we were met by our sunburnt boys at the airport. Joyful reunification was swiftly followed by sleeping in the car.

Verdict: Daughter is A+++ traveling companion, would mini-break with again.

This entry was originally posted at http://nanila.dreamwidth.org/1080138.html. The titration count is at