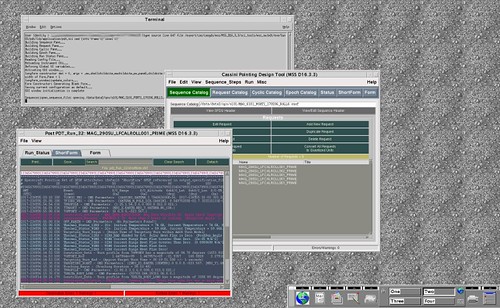 [Deliberately low-resolution screenshot of my desktop with the short form of one of the design runs.]

Today I submitted, for my line manager's scrutiny, the final set of pointing designs that I will ever do for the Cassini spacecraft. These commands will execute in late August/early September.

Pointing design has been one of my favourite instrument operations tasks for ten years. I am quite sad that it's leaving my repertoire.

(I would be going off to have a whisky now, but since the toddler came home today after four explody nappies due to a gastrointestinal bug that's doing the rounds at nursery, I will instead be trying to get some other work done as he's banned from the nursery for 48 hours. And thus is melancholy tempered by necessity.)

This entry was originally posted at http://nanila.dreamwidth.org/1076223.html. The titration count is at