[continued from here: DW/LJ] Since the church was about a thirty second walk away from The Old Grammar School, we stopped by on Saturday morning before heading out and were pleased to find it unlocked.

My perusal of the visitor’s books (which stretched back to 1975, the lengthiest set of log books I’d encountered on our LT holidays) on the previous evening had told us that there were more Thompson mice to be found in the church. We went on a mouse hunt, but could only locate six of the eight that were allegedly hiding there. 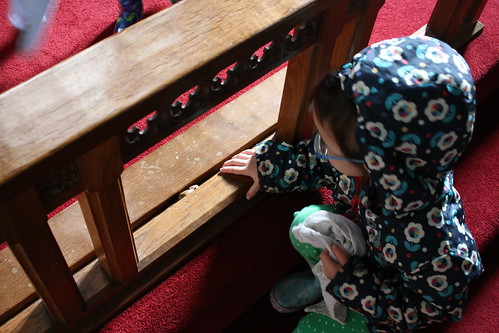 Humuhumu found the first mouse near the altar. 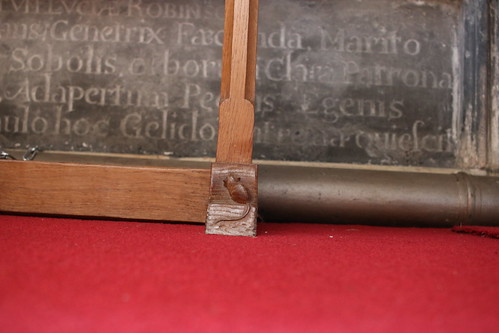 And the second, behind the pews.

Bonus photo: Our local, the Shoulder of Mutton Inn, was just over the road from the church. You know that feeling you get when you walk into a pub that’s been done up just a bit too much? Where you want to shout, like Bernard Black, “Why does everything have to be fancy? I just want sausage, mash and a bit of cake, not twigs fried in honey or a donkey in a coffin!”

This place was exactly the opposite of that. We stopped in on our first evening and every night subsequently. Worried about whether or not they took cards, we scraped together £7.40 in cash.

“That might not get us a round,” he said.
“This is Yorkshire,” I replied. “If they try to charge us a tenner for two pints of booze and two halves of lemonade, I’m leaving, because we’re clearly in the wrong place.”

As it happened, £6.40 got us a pint of very lively cider (crisp, citrusy, refreshing), a pint of tasty ale, the aforementioned lemonades and a packet of peanuts. And lo, we were grateful not to be in London. 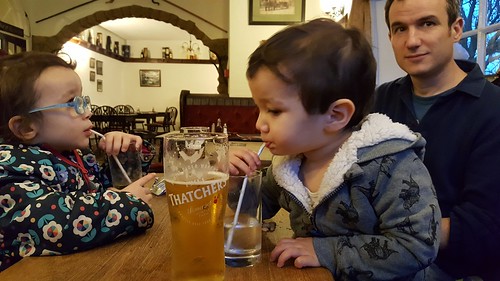 Humuhumu and Keiki enjoy lemonade, while the bloke & I enjoy our pints of ale & cider respectively.

Up next: Egglestone Abbey.

This entry was originally posted at http://nanila.dreamwidth.org/1074888.html. The titration count is at