The weekend started off well, with skipping Parkrun because everyone wanted a lie-in followed by preparation for Humuhumu's first ever sleepover. Her friend Dimples* and brother Dribbly* came for an afternoon playdate, followed by pizza for dinner and strawberry jelly for pudding. Dribbly went home with their parents. Humuhumu and Dimples watched Frozen together whilst dressed as Rapunzel and Elsa respectively. I was astonished to discover that Humuhumu, who watched with an almost ferocious concentration and entirely ignored Dimples' running commentary, has almost the whole film memorised. Not just the songs but the dialogue as well. The viewing was followed by a colouring session in the Elsa colouring book. Humuhumu strenuously objected to my idea that we should disassemble the colouring book so they could work simultaneously and instead they patiently took turns for half an hour until we declared it to be bedtime and they curled up together in the spare room bed.

I read a number of stories, but Dimples was way too excited for sleep. She routinely stays awake longer than Humuhumu, who is firmly attached to an 11-hour snooze every night. We heard quiet talking and sneaking into Humuhumu's room to fetch cuddly toys. After putting my foot down for the last time at 9:30 PM, I waited in our bedroom until the whispering died off. They were sound asleep within ten minutes.

Both girls were up by 7:15 the next morning. Dimples was a font of chat as she ate her crumpet with Nutella, whilst Humuhumu looked pale and distant, though happy. Dimples' mum came to pick her up with many thanks, and then we got ready for gymnastics.

It was badge week at gymnastics and Humuhumu earned her first Fundamental Movements badge. We put the certificate on the wall next to the bed, and she's currently deciding where she'd like to sew on the badge. We don't have a special gym bag for her yet, but it would seem wise to acquire one at this juncture.

Gymnastics ends in the middle of lunchtime, so I put the children in the car with their snacks to tide them over until we got home. About a mile and a half down the road, I suddenly felt something go wrong with the car. It felt like I'd abruptly shifted from fourth into neutral, though of course I had done no such thing. There was, unusually, a car behind me, so I put on my hazards, downshifted to second (not that it made any difference) and coasted into a layby next to a gate featuring a large hand-painted "BULL IN FIELD" sign, where the car promptly died. And wouldn't restart.

Did I mention it was snowing? And distinctly below freezing outside?

I took deep breaths. I rang the bloke, because I couldn't find my RAC (roadside assistance) membership card. The bloke texted me the necessary information. Some people on horseback went by and kindly told me the name of the lane we were in, as even though I drive the route every other week, I didn't know that particular one as it has no sign. I rang the RAC and ascertained that it was going to take at least two hours for them to get to us.

I took some more deep breaths and rang the bloke again. We agreed that him getting in a taxi to swap places with us was a good idea, as Humuhumu was very upset about the broken car and being hungry and cold. (Keiki went to sleep, being blissfully untroubled by any emotional attachment to the car.)

Our knight in shining silver Peugeot turned up with his woolly jumper, book, and crisps. We gratefully clambered into the functioning car and went home, where we all had hot chocolate with marshmallows in. And a good thing too, because it took the RAC nearly three hours to get to the bloke.

The RAC mechanic diagnosed the car as terminal. Our usual garage seems more hopeful. Fingers crossed we don't have to say goodbye to Sophie (our much-loved Citroën) just yet.

* Names have been changed.

On a more soothing note, here are two photos. 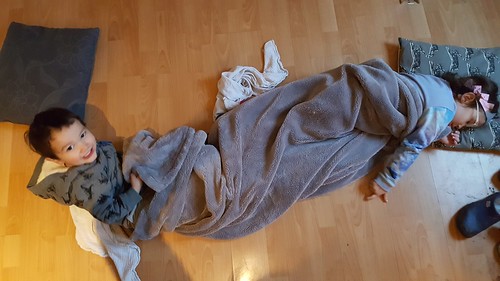 Keiki and Humuhumu wrapped up in a fuzzy grey blanket, pretending to sleep on the kitchen floor. 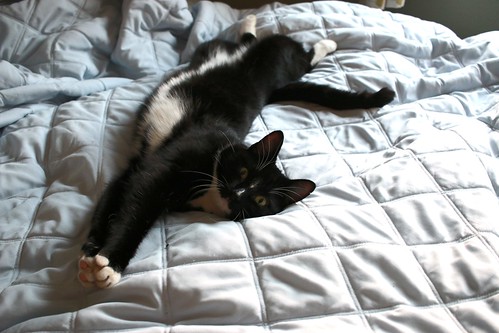 Longcat Telstar is astonished at his own length.

This entry was originally posted at http://nanila.dreamwidth.org/1072006.html. The titration count is at