I’m sharing these photos publicly because I imagine a vanishingly small number of people have ever watched a canal lock gate being replaced. Let alone watched said activity from a bedroom window.

Last week, a crew from the Canal and Rivers Trust (CART) arrived to begin work on “our” canal lock. Obviously it doesn’t belong to us, but we feel a certain sense of pride in it since our cottage is right next to it. The canal lock gate was last replaced in 1996. According to the CART engineer who visited us a couple of months ago to tell us about the impending work, the gates, which are almost entirely made of oak, including the large posts about which they rotate, have a maximum lifetime of twenty years. After that, not only will the gate have warped despite mostly remaining submerged, but often the posts give way. The post on ours had developed a large, destabilising crack and no longer rotated properly. 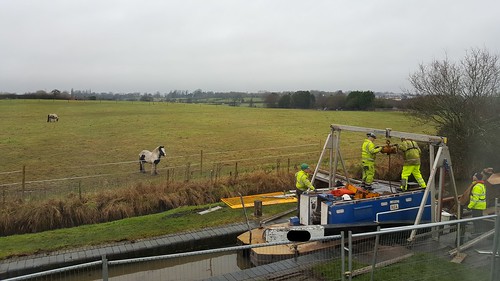 In this photo, the CART crew are setting up a large winch to manoeuvre both the old and new lock gate, arm, and post into position. One of the horses in the field opposite our house is watching them with interest. 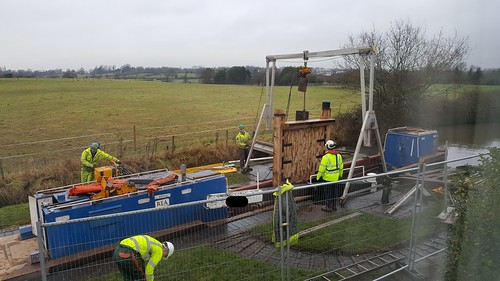 The new lock gate is lifted out of the barge and lowered into the canal opposite the old gate.

A temporary block was put in and the water allowed to drain from the lock. The water levels in the sections just above our lock were also lowered to help the workers install the new gate. I missed the next two days of activity due to being away for work and so when I returned, the new gate was in place and the fencing had been removed. At present, it looks like this: 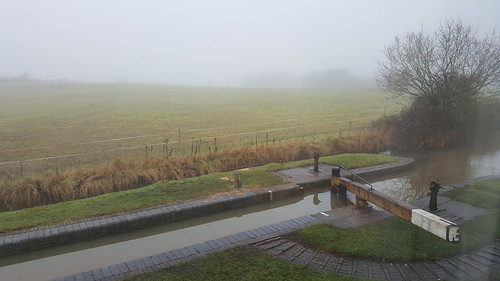 I presume at some point in future there will be a small amount of further work done to give the new gate the black paint that helps protect it, as well as the smart white paint that goes on the arm.

Since this is an activity that only happens every twenty years, I’m happy I was home to see it!

This entry was originally posted at http://nanila.dreamwidth.org/1070850.html. The titration count is at