I did a lot more baking than I'd intended this weekend. Saturday morning we did Parkrun, then came home and made pancakes & French toast for brunch for some friends. In the afternoon, the pre-schooler and I set to work making cupcakes. I have this delightful cupcake recipe book, Lily Vanilli: A Zombie Ate My Cupcake, which was given to me a few Christmases ago by sister-out-law. We've only once made one of the recipes in full - the meringue ghost cupcakes for Humuhumu's birthday, and that's when we learnt that the base recipes for the cupcakes and the icing are really good just on their own. The fancy ghoulish decorations are fun, but unnecessary.

We decided to make the pecan, cinnamon & nutmeg cupcakes and the vanilla icing. Humuhumu helped with the measuring and the pouring but lost interest while they baked in the oven. When we finally got to the icing stage, I didn't bother calling her back and started doing the icing and the sprinkles. My parents rang after I'd completed decorating three of the 18 cupcakes and I stepped away from the kitchen to take their call. I walked back in to find Humuhumu expertly applying both icing and sprinkles to the remaining cupcakes. 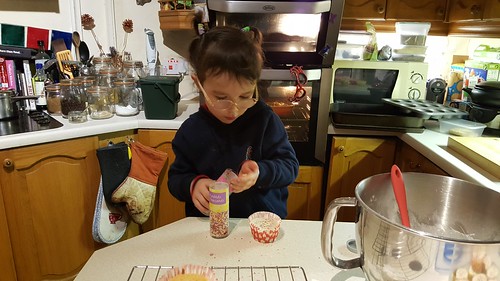 [Photo: Humuhumu puts sprinkles on a freshly iced cupcake. There is cauliflower cheese baking in the oven behind her.]

I should note that today there are eight cupcakes left so I'm not expecting them to last more than 72 hours.

One thing I knew about Lily Vanilli's recipes but had somehow managed to forget was that her icing recipes make about double the amount of icing one can reasonably put on a single batch of her cupcakes. Either I should have halved the recipe or made 36 cupcakes. There was a lot of extra icing, which I was determined not to waste.

On Sunday morning, the bloke took the children to gymnastics and I scanned through my Nigella Christmas cookbook for a cake recipe. I settled on the sticky gingerbread, which is fancier than the ginger cake I normally make though still pretty easy, and is listed as "icing optional". The recipe is vague on length of time required in the oven - 45 to 60 minutes seems a rather wide temperature range. I took a punt on it and left it in for 52 minutes at 150 degrees C (fan on) and that turned out perfectly. After it cooled, I poured the remaining vanilla icing over it and we had slices of it at tea time. It was hoovered up by everyone and we have agreed that it is one we will definitely make again.

This entry was originally posted at http://nanila.dreamwidth.org/1070139.html. The titration count is at 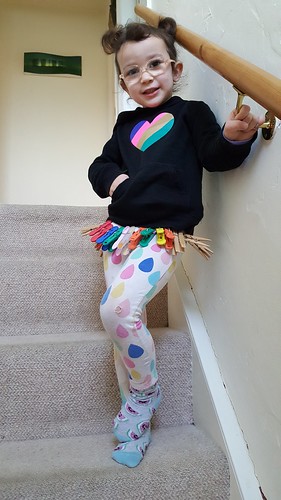 I asked Humuhumu to keep herself and Keiki amused with the laundry basket whilst I put away some freshly tumble-dried clothes.

As I was finishing up ten minutes later, she sang out to me, "Mummy, come and look what I made!"

And so I was greeted on the stairs by a daughter in her black heart hoodie, rainbow raindrop leggings, watermelon socks...and a skirt constructed from clothes pegs.

This entry was originally posted at http://nanila.dreamwidth.org/1070600.html. The titration count is at