A visit to the California Academy of Sciences, located in SF’s Golden Gate Park needs no excuse other than the place itself. However, in this case, there is a story behind our trip there.

We chose our temporary place of abode in SF based on the accessibility it afforded to the park. The N-Judah tram line stopped a mere block and a half away, and dropped us off about as close to the front door of the Cal Academy as it’s possible to get if you’re not already on foot.

On my previous trip to San Francisco in December of 2013, I was privileged to be shown around the Cal Academy by

emelbe, who volunteers there regularly.

emelbe drew my attention to the book Pierre the Penguin and suggested I take it home to the then-13-month-old Humuhumu. I did.

I have read Pierre the Penguin to her, and then to Keiki, at least once a week ever since. She has the book memorised.

Pierre is an African penguin who lives at the Cal Academy along with 19 other penguins. One day, Pierre moulted as usual. Less usual was the fear he developed of going into the water, a necessary step to stimulate the re-growth of his feathers. He stayed bare. The other penguins began to pick on him. Aquatic biologist Pam tried a heater and medication to get Pierre back into the water, but it didn’t work. Eventually, she hit on the idea of making Pierre a tiny neoprene wetsuit. (The wetsuit is on display in the Academy bookshop.) Not only did this keep Pierre warm in the water, it also made him appear more like a feathered penguin, which stopped the other penguins from bullying him. He was able to resume diving and a few weeks later, his feathers had regrown.

When we told Humuhumu that we would be able to visit Pierre on our trip to the USA, it became her main focus. Every day she would ask, “Are we going to see Pierre?” Finally the day arrived when we could say yes.

It was a tremendous joy to watch her tear from one end to the other of African Hall toward the penguin enclosure, crowing, “Pierre! Pierre! Pierre! Pierre!” If I ever forget to be grateful, I need only remember this event to recall the level of privilege I’m able to afford to my child: to travel from one side of the globe to the other to visit a penguin she’s been reading about since she was one. OK, so that wasn’t the only reason we made the journey, but to be able to include it was still remarkably fortunate.

If that weren’t enough, we got to see Pam (nb: I think it was actually an Amy, but never mind) pop out of the hidden door in the sky-painted wall with fish in her pail, and feed the penguins (twice a day without fail).

On the day Humuhumu returned to nursery, her key worker asked her who she met on her trip to the USA. Her first answer: “Pierre!” The nursery staff asked who Pierre was: perhaps a member of the family? She shook her head. Who is Pierre, then? “A penguin!”

They thought she was joking and asked me about it when I picked her up, so I got to explain to them that yes, Pierre is literally a penguin and yes, that was the highlight of her trip. 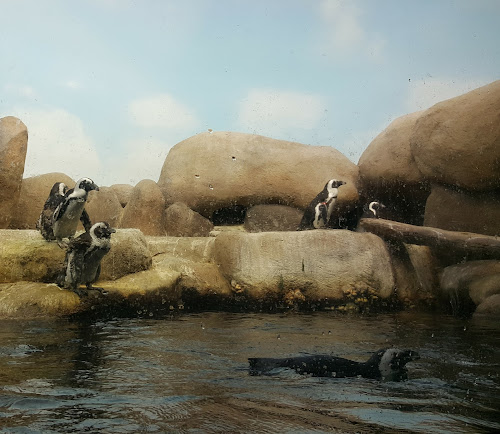 This entry was originally posted at http://nanila.dreamwidth.org/1045506.html. The titration count is at