emelbe first introduced me to photos of it, which was at least 10 years ago. Knowing the aquarium was there heavily influenced our decision to stay in Pacific Grove once the Santa Cruz portion of our trip was done. We ended up going to the aquarium twice and spending most of the day there both times. It’s huge and beautifully set up and there are so many interactive things for the children. Nearly all of the second floor is splash pools and mazes and tanks on their level (e.g. the floor) and activities.

It was also a rather good Pokéspot because free wi-fi + 5 Pokéstops with lures going almost constantly + gym + historical spot next to the ocean == many, varied and frequent Pokémon appearances.

All of these images were taken with my phone. I brought my dSLR and nice telephoto lens, but they proved too much of a faff to deal with when chasing around two active children. I’m a bit sad I didn’t manage to get a good shot of an otter or from the shore bird enclosure (they come to within inches of the humans and there are no barriers) or of the Great Wave exhibit where you stand under a glass ceiling and the water crashes over you. I guess we’ll just have to return again, though my advice to anyone else contemplating a visit would be to avoid Labor Day weekend. Our first visit was on the Saturday and it was heaving. The Tuesday visit (with my aunt + cousin) was much calmer.

An aquarium specialty is truly enormous tanks. Below is a portion of a floor-to-ceiling one that, when walked through, gives the impression that the fish are circling around you. 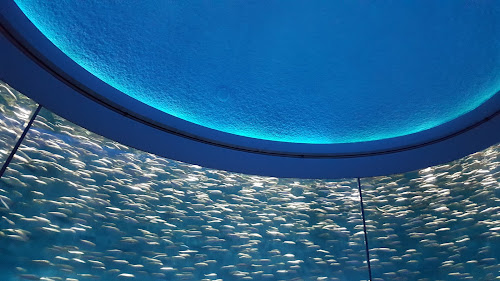 Finally, Humuhumu and the bloke discovered an interactive in the ¡Viva Baja! exhibit where you could colour in your own fish, e-mail it to yourself and then view a 3D version of your fish design swimming in the ocean. Here is Humuhumu’s vibrant fish.

This entry was originally posted at http://nanila.dreamwidth.org/1044973.html. The titration count is at