The weather was cold and bright this weekend. On Sunday, we met in a local park with friends from our NCT classes and their children, who are almost exactly the same age as Humuhumu and Keiki. The first is two weeks older than Humuhumu and the second is a week younger than Keiki. So everyone has a "best friend", in the popular parlance of the three-year-olds, which works out nicely.

We spent the afternoon gardening, which mostly consisted of filling up the compost bin, the garden waste bin and several buckets, as well as making an enormous pile of brambles down the end for a bonfire. It looks a lot clearer, but who knows when we'll get the time, energy and money together to plant things to replace all the weeds and overgrowth we demolished. Anyway, there was a lovely golden hour at the end of the day, so we took some bread and went for a canalside amble. 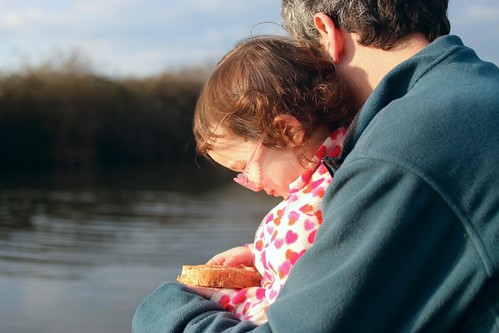 [Humuhumu inspects the bread, sitting on Daddy's lap by the canal and waiting for the ducks to turn up.] 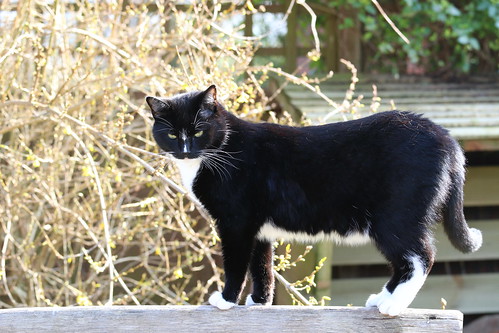 [Telstar standing on the back of our wooden bench.]

This entry was originally posted at http://nanila.dreamwidth.org/1019408.html. The titration count is at