Poultry Cottage is located near the Welsh/English border, so the area saw its fair share of skirmishes over the years. Montgomery Castle didn't survive into the modern era, though it was surely much more functional than showy Powis Castle, which has.

The former is bordered on three sides by cliffs and a valley, and the "accessible" side involves a brief but vertigo-inducing hike up a precariously narrow footpath. We were visiting in February and it's Wales, so obviously it was damp and cold. The screaming, icy wind that greeted us on reaching the plateau on which the castle sits provided an additional deterrent to unfriendly visitors, I'm sure. 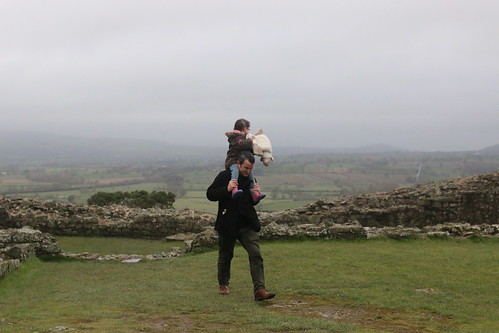 We ended up visiting Powis Castle (National Trust property) twice: Once to tour the interior, where photography is forbidden because many of the items on display are still the private possessions of the earl, and once to tour the gardens. The centuries-old yew hedges are the highlight of the upper garden, not because they've been exquisitely sculpted into topiary or regimented into orderly barriers, but because they have been allowed to evolve into weird, organic shapes. 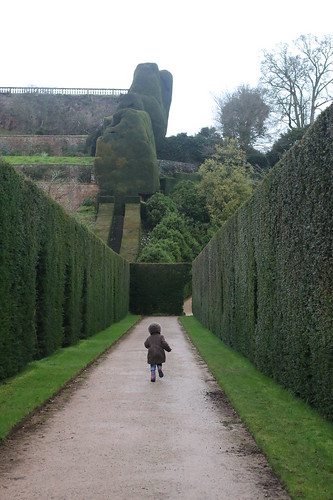 [Humuhumu running down a path in the lower formal garden. The clean sharp lines of the well-trimmed hedges contrast sharply with the undulations of the ones above.]

This entry was originally posted at http://nanila.dreamwidth.org/1015360.html. The titration count is at