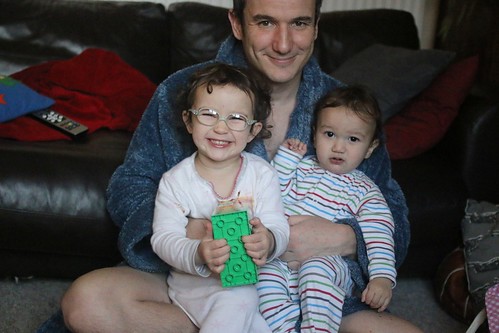 [The bloke with Humuhumu and Keiki on his lap, all in their pyjamas/dressing gown. Humuhumu is hugging a Duplo building she'd just constructed. There is Nutella on her pyjama top. Bloke and Humuhumu are smiling. Keiki, as usual, looks very dubious about the camera.]

Sorry again for the lack of upkeep in regular posting. It's Life getting in the way again (yes, that old chestnut). The bloke has been quite ill for the past few days, and it's always difficult when one adult is not at full strength.

There have been developments in the Adorable department recently. I was putting Humuhumu to bed and apropos of nothing she turned to me and said with a big smile, "I love you!" It's the first time she's said it spontaneously. Then when the family dropped me off at the train station, the bloke had to drive back because although I said goodbye and blew her a kiss, I forgot to give her a cuddle. And while I was giving her a cuddle, Keiki made it very clear that he wanted a cuddle too.

Humuhumu proceeded to temper this with the following. We recently added Shark in the Park to our repertoire of bedtime stories. In summary, a boy goes to the park with his new telescope and he keeps looking at fin-shaped things and assuming they're sharks rather than cat's ears/crow's wings/his dad's amazing pompadour. Anyway, I read out the title: "Shark in the Park." No, said my child, it's Shark in the Park.

Shark in the Park, I repeated. NO, insisted my child, it's Shahrk in the Pahrk.

Feigning an English accent, I said, tentatively, Shahrk in the Pahrk...?

Yes, she replied, beaming at me fondly.

This entry was originally posted at http://nanila.dreamwidth.org/1004440.html. The titration count is at