Keiki and I spent two part-days visiting Smithsonians in Washington DC whilst we were staying in Silver Spring, MD, for

dizzykj’s wedding. I’ve wanted to go to a Smithsonian (any of them!) since I read about them as a child, and I was as thrilled to be able to go this May as I would have been thirty years ago.

On our first expedition, we rode the Red Line from Silver Spring to Judiciary Square, and walked from there to the Air and Space Museum. Judiciary Square was eerily deserted. I got the feeling it was a bit like being in the City (in London) at the weekend: places that are absolutely heaving Monday through Friday are completely empty on Saturday and Sunday.

After all the tech, I wanted to spend a little time appreciating nature so we headed for the nearby Botanic Gardens. I was hoping to get a cup of tea there, but it turns out to be pretty much the only place on the Mall that doesn’t have a cafe. I had a quick spin through the glass houses and then went back to the Smithsonians.

I chose to have my late lunch and very delayed cup of tea in the National Museum of the American Indian. I later discovered that I’d chosen one of the best of the overpriced Smithsonian cafes to eat in, according to the locals in the wedding party. I did think my enchiladas were pretty good at the time, but it was still nice to have my unintentional good judgment validated! 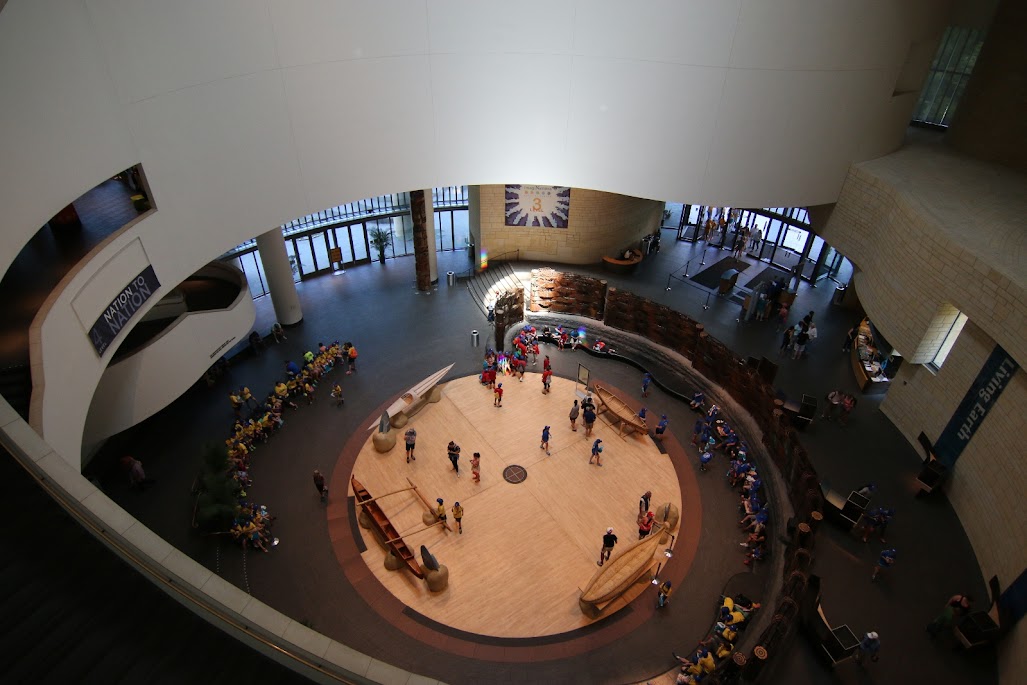 The very beautiful internal architecture of the mostly harrowing National Museum of the American Indian. I didn’t take any other photos inside, just experienced all the exhibits, which apart from the modern ones designed by Native Americans, were pretty unremittingly depressing. It’s kind of hard for them not to be when the treatment of native peoples by the US government was (is…) appalling for most of the US’s history.

Keiki sat with me and quietly watched a fifteen minute film about the tragic nineteenth century removals of native peoples from their land, so when he took a shine to a rattle in a Navajo design in the shop afterward, I got it for him. It’s now one of his favourite toys.

This entry was originally posted at http://nanila.dreamwidth.org/983318.html. The titration count is at