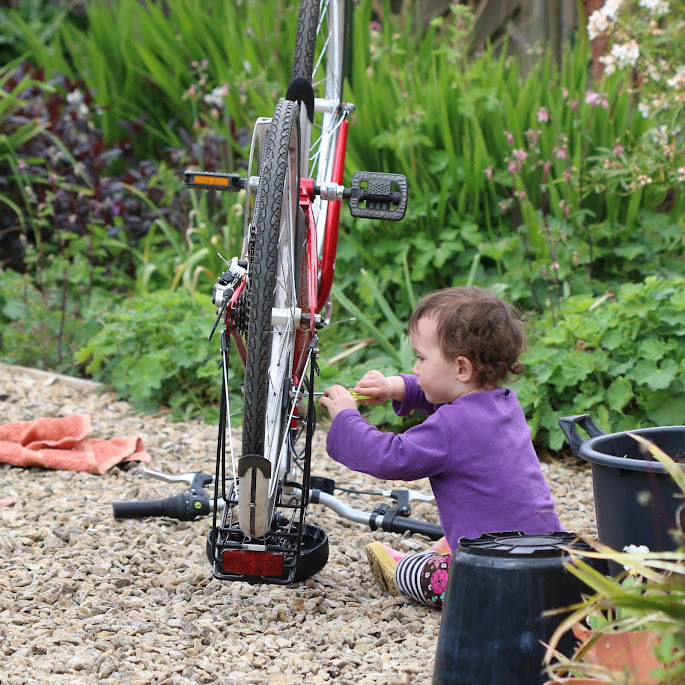 [Photo of Humuhumu concentrating very hard on wielding a screwdriver on Rita, my old red bicycle.]

The bloke sent the above photo to his father. Father-out-law's reply? "It looks like she's loosening the brake cable. Are you sure she hasn't taken out a life insurance policy on you?" Ah, thank you, sir, for stoking our fears that we are, indeed, raising a Stewie.

(She decided to work on this bicycle unprompted. The bloke went off to fetch something from inside the house and when he came back, she was tinkering with the screwdriver, copying his actions.)

In other cognitive development news, Humuhumu has been playing with an app called Toca Mini for over a year. The characters start out completely blank - solid white, with no features. About six months ago I asked her to start taking photos whenever she finished a design, and she almost always does it. The photos automatically back up from my phone to my Google account.

She designed a character this morning and it struck me that she'd made a sudden leap in understanding the symmetry and positioning of facial features. I mean apart from the fact that she always gives her characters four eyes (the maximum permitted by the app), she now deliberately puts them all on the same horizontal line, and spaces out the nose and mouth beneath them. There's a marked difference between the characters she produced a month or two ago, and the one from this morning.

This entry was originally posted at http://nanila.dreamwidth.org/974636.html. The titration count is at