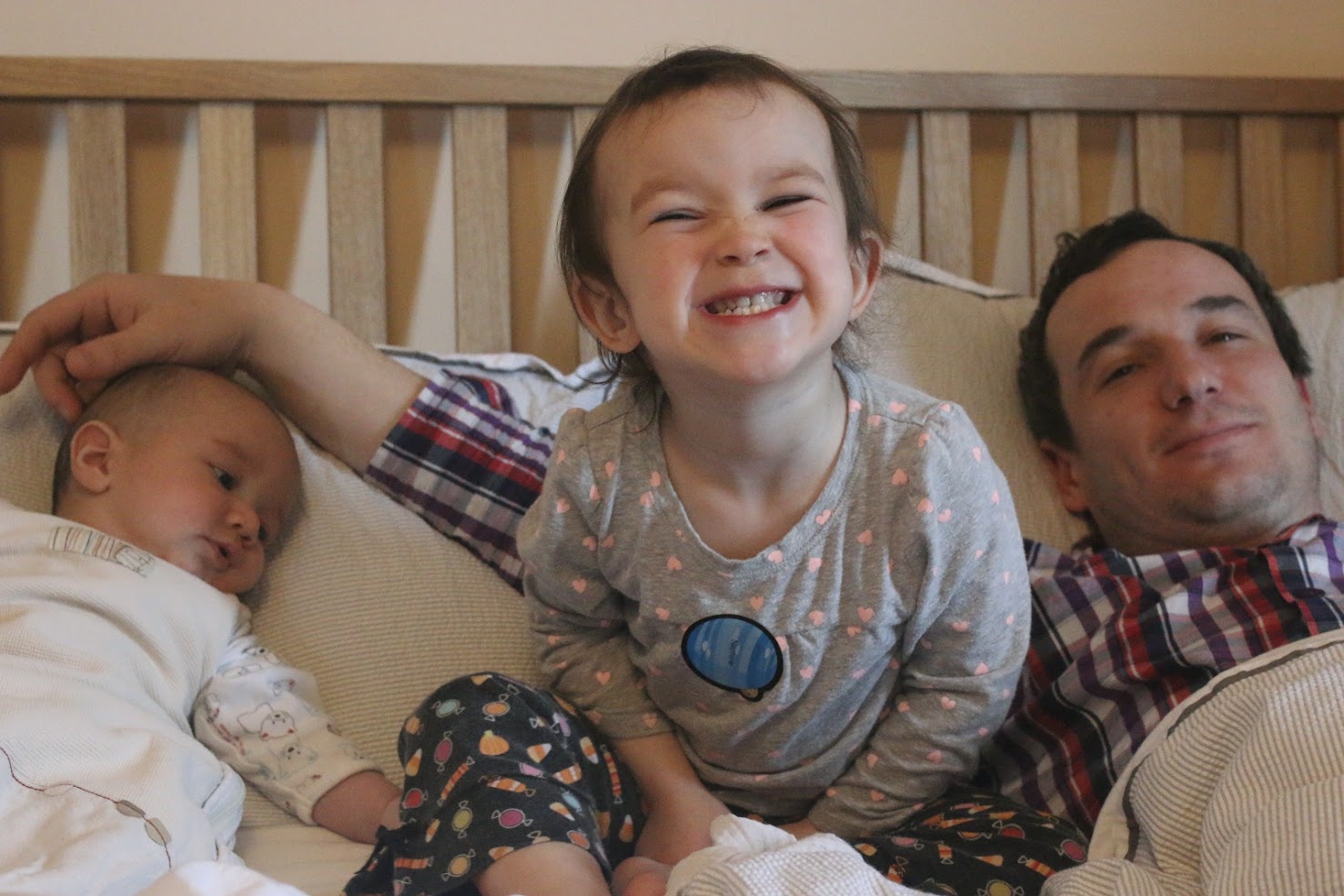 Two dual nationals and their Daddy. The sticker on Humuhumu's shirt is Neptune, from her Usborne "Space" sticker book. (This means that her version of the solar system as recorded in the book has only seven planets.)

Last Friday we headed to the embassy in London to register Keiki's birth and apply for his other passport.

When we did this for Humuhumu, the bloke's trousers split as we were navigating the packed morning Tube. He got to swear his oath of truthfulness before the consular officer with his jumper artfully tied about his waist to keep his pants from peeping out playfully from beneath his trousers. We were therefore anticipating some manner of sartorial disaster to befall one of us during the adventure.

It didn't happen during the commute, which was unnecessarily exciting due to the cancellation of our first train. We hustled to get on a train going in the opposite direction so that we could travel instead via fast train. The fast train, by virtue of being fast, was also rammed, so we ended up getting on the next slow train, which stopped at the station we started in, only 15 minutes later. Humuhumu, who loves public transport, entertained morning commuters on the busy platform by gleefully greeting the arrival of every train with, "OH, TRAIIIN!", whilst her parents attempted to disappear into their hats.

Despite the delay we still arrived a comfortable margin before our appointment to go through the security checks and unintentionally play "spot the celebrity". (Last time it was Jay Rayner. This time it was Rita Ora. Her assistant interrupted our initial check-in to determine where to go for a VIP appointment.)

Once we were through into the citizen-only waiting room, Humuhumu gravitated towards the soft play area and promptly befriended a small boy. Or rather, attracted a small boy follower whom she scarcely noticed. (This is a theme at her nursery as well. She has a staunch attendant there who always fetches her coat and bag when we come to pick her up.) He toddled loyally after her, presenting her with blocks that she could integrate into her sculptures, which she then kicked over gleefully.

After paying the fees for the registration and passport, we settled down to wait until we were called before a consular officer. Keiki woke, realised he hadn't been fed for a while, and squawked. I arranged my cover and sat down to feed him. When he was finished, I removed the cover to find that the sartorial disaster had struck. These days I find I don't have much leakage from the opposite breast whilst feeding, and when I do, a breast pad is more than sufficient to soak it up and protect my clothing. But of course, not this time. My entire right side was soaked. There was no way to conceal it without putting my wool coat back on, which I did, even though it was tropical in the waiting room.

In the end, I swore my oath of truthfulness to the consular officer whilst sweating profusely and smelling faintly of stale milk. Classy.

This entry was originally posted at http://nanila.dreamwidth.org/968569.html. The titration count is at