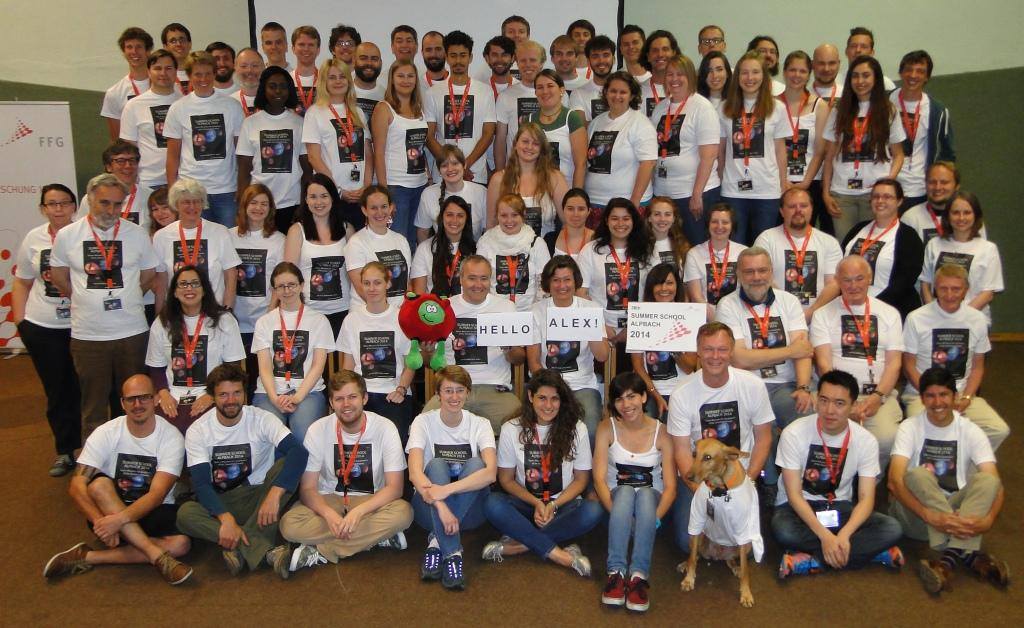 [The 2014 Alpbach Space Summer School participants. Photo not mine - pinched from Paxi the ESA mascot's home page. I made this picture a bit bigger than I normally do for posted photos. Can you see me?]

I missed a day of posting. This was a tactical mistake, as a day in Alpbach time is more like a week in terms of eventfulness. I'm up super-early on Wednesday morning in order to catch up, as today will be more of the same. The four student teams have until midnight tonight to hand in their final reports and presentations, after which neither can be altered. They go before the jury tomorrow and the winners are announced at Thursday's dinner.

Fished from what now feels like the dark recesses of distant memory, Day 7.

Monday began with the last set of lectures. These were rather thinly attended compared to the previous week, as around half of each team decided to skip them in favour of preparing for the preliminary design review. I found this a bit sad as the lectures were quite good. The first lecture was given by a very prominent French scientist, who, despite his habit of muttering through his beard, gave a rather beautifully structured overview of the last fifty-odd years of space exploration of the terrestrial planets (including the Moon). The slides were so good I've pinched them and asked permission to use some of them for future outreach talks. The penultimate and final lectures were given by a nearly as prominent but very shy German scientist, who talked about the outer planet's moons and the study of exoplanets. I was pleasantly surprised later to learn that the students found these inspiring, since neither of them were helpful in an immediate sense for their mission design for this school.

During the coffee break, our school's photographer took the group photo above, which (I believe) has been sent to the ISS. Alexander Gerst, the German astronaut currently aboard the space station, is an alumnus of the Summer School and headed a team while he was here.

When the last lecture finished, the students dispersed to wolf down their lunches and continue preparing for their Preliminary Design Reviews*, which took place at 1630. I was on a review panel with a fellow roving tutor and the French lecturer from the morning. During the review, the lecturer got out his laptop and started typing. Even I found this slightly unnerving, and I wasn't the presenter. What the students would've found even more unnerving is that he wasn't answering e-mail or even updating his Facebook status. Oh no. He was correcting their orbit calculations. With hindsight, we probably did the review in reverse order. We (said lecturer and I) began by giving them a lot of critical feedback, which was positively phrased, but also probably didn't help their nervousness. This is a fault of mine. I tend to jump straight into problem-solving. The third juror, a quiet and lovely man, didn't speak until we were nearly finished. He praised them both for the strength and originality of their scientific idea and for the quality of their presentation. This was good because it bolstered their confidence, on top of making them realise how much work they still had to do.

We dashed back to the hotel after the review for our tutor meeting at 18:00. The feedback was largely positive apart from one team. Flushed with the success of their requirements review (the one that I had attended on Day 4), they presented only two slides much too quickly and therefore missed a step in preparing for the final presentation, which lasts an hour. All of the team tutors are invested in their teams' success, but the two tutors for this team are so much so that they're practically part of the team and they looked gutted. (If you're finding yourself distressed on their behalf, don't worry; the team and their tutors have since recovered!)

We went to dinner to find a significant proportion of the students missing (mostly from that team), since they'd decided to stay in the Schoolhouse and prepare for their delta review. It transpired that it was the birthday of one of the team tutors. Every night one representative from each team has to stand up and describe briefly the team's progress. The teams are called in random order. His team (the one that featured strongly in my early posts and has gone from having the worst to probably the best team dynamics in five days) decided to break the rules by requesting to go last, and by all standing up together and rapping a poem they'd written in his honour. It was adorable.

We returned to the Schoolhouse after dinner. The tutors finally exited after midnight. Sadly, since it was Monday we couldn't find anywhere to have a beer in honour of the birthday boy. But I wouldn't say he came off too badly, given that he now has his very own song, immortalised forever on the Summer School's Facebook page.

Extracted from the fog of my underslept brain, Day 8.

Although the church bells woke me at 7 AM, I needed to get some work done so I didn't head to the Schoolhouse until nearly 10 AM. I visited each team in turn, but they were all so intent upon their individual tasks that I just sat quietly in the rooms working unless asked a question. Having been chastised by a member of one team who thought I hadn't spent enough time with them (true, but this is because every time I went in and offered to help, no one took me up on it!), I sat in their room with parts of their engineering group for a while in the afternoon prior to the Final Design Review.

I left shortly before the review, as I was part of their review panel, along with the head of the Summer School, who is also the head of the Austrian Space Agency. (I bet that wasn't intimidating for them at all, oh no.) They did pretty well, although for some mysterious reason they still had an abundance of speakers when it's plain that they only need one - the chap whom they appointed their spokesperson on the very first day. He has all the qualities and the complete vision of the mission that a leader needs, and I think their failure to recognise it stems from the relative youth of this team. We gave them plenty of feedback on their presentation. I stressed to them that if they performed a duty cycle calculation a lot of the problems with incorrect budgets and assumptions in their presentation would magically disappear. I also (after some discussion with the team tutors, who were wary of appearing biased), returned later in the evening to suggest to them that they appoint a single spokesperson for their final presentation and hinted strongly at the identity of the person they should consider appointing. They seemed to take it well, but who knows what they will decide in the end - one of the fun things about this process is the unpredictability of the students!

* Just to give you some perspective on how accelerated this timetable is, the JUICE mission was selected in 2012. We had our first requirements review last year. We have two more reviews before PDR, which is still over a year away.

This entry was originally posted at http://nanila.dreamwidth.org/936667.html. The titration count is at