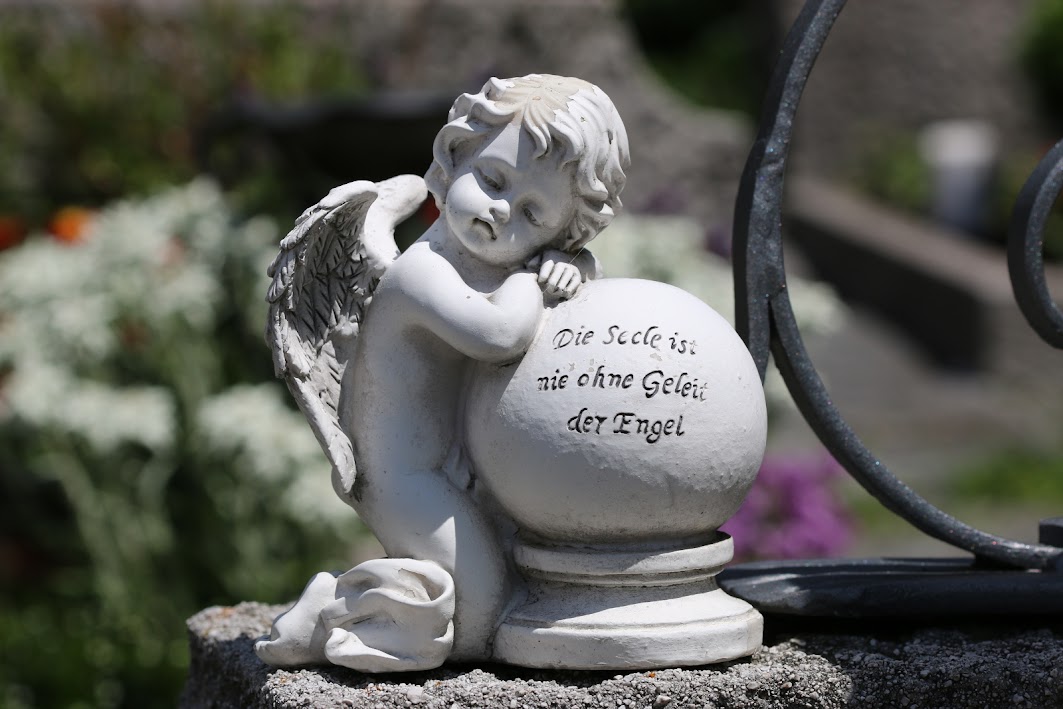 [Image of one of many small cherubs in the church graveyard. I will hazard a guess at the translation of the German inscription "Die Seele ist nie ohne Geleit der Engel" as, "A soul is never without the company of angels."]

So. Sunday. Having a little difficulty summing up Sunday. For a start, I was particularly homesick for my family. We talked on Skype a few times over the course of the day. I watched Humuhumu bibble around her daddy in one of the new dresses her grandparents bought for her, playing with the new teddy bear her grandparents bought for her. (I sense a theme here.) She isn't too well, poor thing, as three of her canines are coming in at once and she's getting over a bad cold and an eye infection. Her voice was hoarse and she whimpered now and again because of the pain in her teeth, but, being an even-tempered child, she rallied on. I desperately wanted to give her a cuddle, and the five days I have to wait before I can do that weighed heavily on my heart.

I forced myself to go down to the Schoolhouse at 10 AM. Many of the students went to the church services at 9, so I didn't think it was worth heading in too much earlier. It was a quiet morning. The lack of urgency gave me a strong feeling that they still didn't seem to have a grasp on how much work they needed to do before Monday's review. My hunch was borne out as the afternoon progressed. They didn't start working properly until much later in the evening, after dinner, when at last the tutors lost patience and spelled out for them that "mission profile" means you have to have a full mission scenario from launch to end of mission defined, complete with orbit trajectories (and that means specific altitudes, please). You also have to know the mass of your spacecraft(s), an estimate of the power budget, daily data rate, communication band, ground station coverage, etc. And you need to have your payload defined, to ensure that you can deliver the science you have promised. They had a few of these numbers here and there, but others they hadn't even considered yet. It was finally enough to shock them into taking drastic action.

We left them to it at 12:30 AM and went in search of beer, forgetting that this is a small village and it was Sunday. Disappointed, we dispersed to our rooms just before it began to rain.

This entry was originally posted at http://nanila.dreamwidth.org/936130.html. The titration count is at