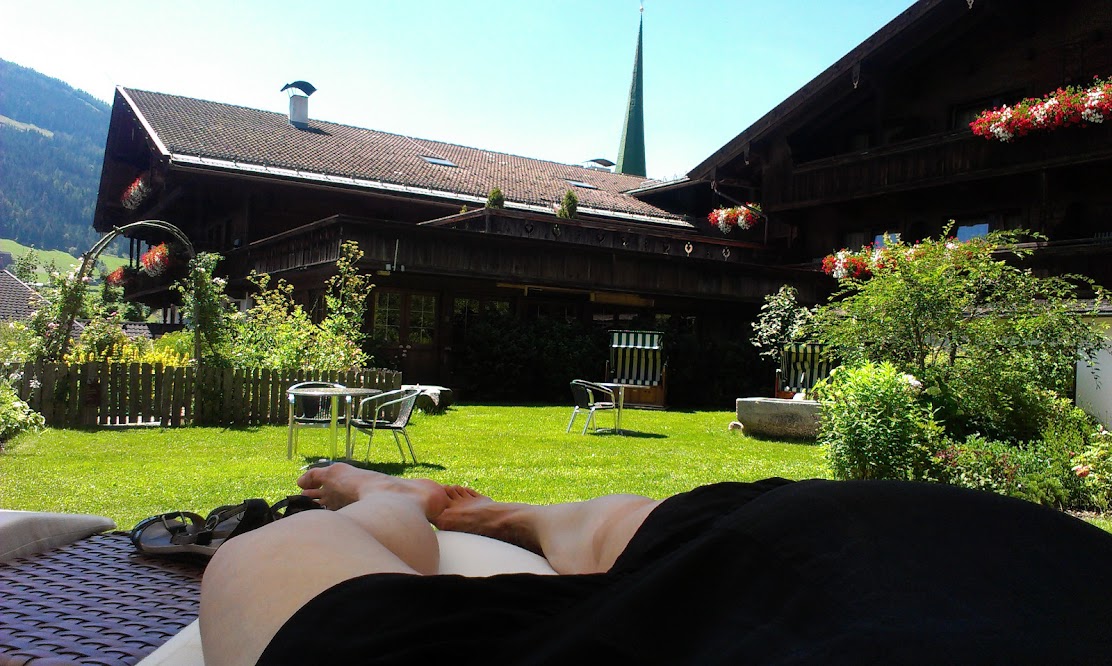 [View over my outstretched legs as I relax on a lounge chair in the hotel garden.]

Most of the students and a fair number of tutors went on alpine hikes yesterday. Given that hauling my pregnant self from the Schoolhouse to the hotel, a distance of about 400 metres at an incline of OMG STEEP, leaves me breathless in the current heat wave (30+ degrees C), I decided not to go. I spent the morning and early afternoon alternately working and resting.

Just before 16:00 I headed back to the Schoolhouse. A team tutor (science) for one of the teams had not yet returned from the hike, and their science team was in disarray. With the permission of the other (engineering) tutor, I stepped in to marshal them to order. I put all their science objectives up on the blackboard and assigned the requirements to the members of the science team according to their interests. Some of them were already working on them, but no one knew what anyone else was doing, so there were both gaps and overlaps. One of them wanted to rewrite the objectives (not just the requirements, the original science objectives). I had to give my speech again about it being far too late for that and needing to move forward because they must have a payload (and spacecraft(s) and mission scenario e.g. orbits) by Monday. They settled down to do some serious work.

Once the scientists got organised, they started putting some numbers up on the board, which gave the payload and mission (orbit) analysis teams something to work with. After dinner, the team reconvened and each scientist took it in turn to explain and defend their numbers to everyone else.

All of this took most of the afternoon and the evening and I'm deliberately glossing over the details, but it was wonderful to watch the transformation from utter chaos and despair to order and optimism. Their leader, whom it was obvious to the tutors should have been the leader from the first day, had agreed very reluctantly to do so that morning. By the evening, he was in control, with the full backing of his peers. He called for a engineering review at 12:15 AM to ensure that the payload team were getting the interpretation of the science team's requirements right, and they identified where they'd need to have discussions or rethink the need for the given measurement range or resolution given available technologies.

I'm afraid I didn't rove much as a tutor yesterday since I got caught up in this team's struggle, so my goal for today is to wander more freely!

This entry was originally posted at http://nanila.dreamwidth.org/935717.html. The titration count is at