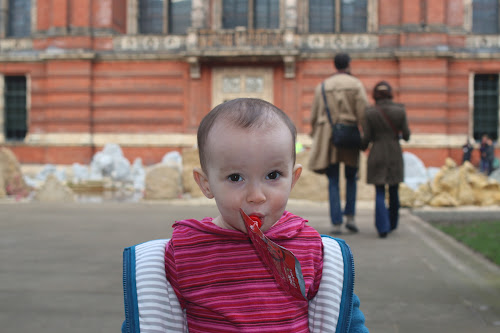 [Humuhumu looking particularly intelligent in the garden of the Victoria & Albert Museum.]

Three weeks ago (which now feels like a lifetime ago), Humuhumu and I went to London to spend a few days exploring.

We started off our exploration with a trip to Accident & Emergency at West Middlesex Hospital. As you can imagine, this was not part of our original plan. We managed to get through our four-hour journey from rural Worcestershire with minimal fuss, although Humuhumu was a little under the weather and had a slight temperature.

By the time we arrived at our friends' house and had some food, she had decided she was really finished with everything. I went to put her in the bath and discovered she had a full-body rash. I tried to put her in the bath. Cue top-of-lungs screaming. I phoned NHS Direct. Since we weren't at home, they sent us to the hospital.

I suspect that by the time the taxi arrived, the Calpol had kicked in and she was over it. But we proceeded to A&E regardless.

If you were to organise a tour of London, you probably wouldn't start with A&E. As far as I could work out, there were three types of people there.

Humuhumu, by this time, had recovered her good humour and was attempting to charm people with smiles and chuckles.

Her success rate was low.

We were called to see the Rapid Response doctor quite quickly (within half an hour of arrival). He peered at Humuhumu, who submitted to his examination calmly, and concluded that she had a rash and a cold. (Yes. Yes indeed.) He gave us antihistamines and told me to give them to her for the rest of the week.

My little drama queen and I went home.

Despite the inauspicious beginning, the rest of our week went rather wonderfully. We spent time with

owlfish and her Grouting, who is a few months older than Humuhumu, at the V&A, exploring an art installation in the garden. We saw

foxfinial at the Tate Britain, where we all had to restrain ourselves desperately from touching the Henry Moores and the Barbara Hepworths. We went to the Science Museum with the other parents and children from our lab and had lunch with our labmates. And we spent time with our gracious hosts and their Minions.

This entry was originally posted at http://nanila.dreamwidth.org/915625.html. The titration count is at