For the bloke's birthday two weekends ago (How? Where does time go?), we went to a Landmark Trust property in Lincolnshire called The Chateau. We went to another property, St Winifred's Well Cottage, last year - see the "landmark trust" tag to view photos from that visit. I'm reluctant to call this a tradition just yet, but it's a rather appealing one.

The Chateau was built in 1747 by an enterprising chap who could afford to purchase a big plot of land, but not to build a stately home upon it, said land being sadly lacking in such an established building. So instead, he designed a pretty place atop a small hill that, from the road, would look like an imposing edifice when in fact it contains only a single bedroom. A succession of estate owners became increasingly unable to keep it up to its original standards, especially after the grand estate finally was built a couple of miles down the road. It was bequeathed to the Landmark Trust, who opened it to paying guests in 1984. 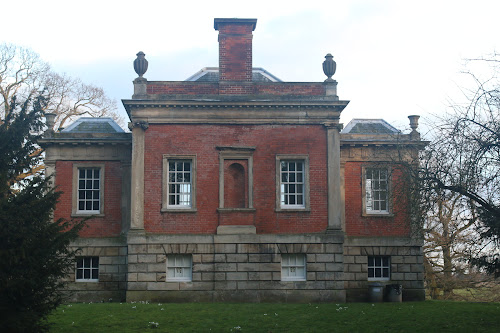 The Chateau from the front.

We rocked up on Friday night by the light of a full moon, in gale-force winds, armed with plenty of wine and insufficient firewood. 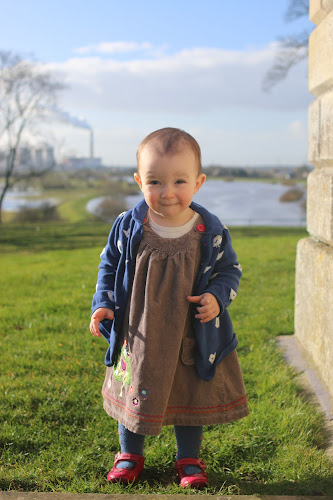 Possibly the cutest picture I have ever taken of Humuhumu (outside the chateau, in front of the view of the power station and the overflowing river) and hence outside the cut.

We had to depart at 6 AM the next morning, so this is not a true goodbye shot as it was still pitch-dark when we left. But it's prettier than what I would have taken then. 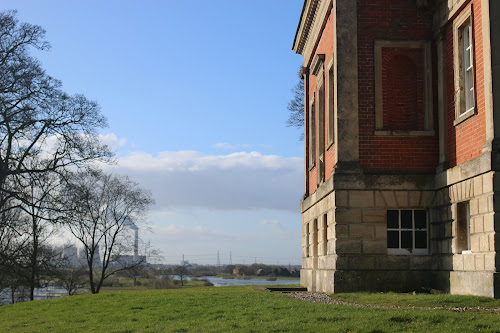 It's a beautiful house and location, but it lacked the cosiness of St Winifred's and I reluctantly concluded that it didn't delight me as much. I got more out of the previous year's stay in large part because of the sense of abiding love for St Winifred's that's imparted by the log books. The woman who donated the cottage to the Landmark Trust goes back there every year and makes an entry full of memories and old photos, and repeat visitors (most of them are) fill its logbook pages with creativity and outpourings of fondness for it. Something about that, perhaps also because of the wellspring and its religious associations, connected me with the place in a way I didn't get out of The Chateau despite its longer tenure with the LT.

This entry was originally posted at http://nanila.dreamwidth.org/914580.html. The titration count is at