The three of us spent the weekend in a cottage with friends in Tideswell, Derbyshire. The cottage looked onto the grounds of the church, the "Cathedral of the Peaks".

Naturally Humuhumu and I went to explore the churchyard, and of course we met the resident cat, who appeared eerily and silently from behind a gravestone. 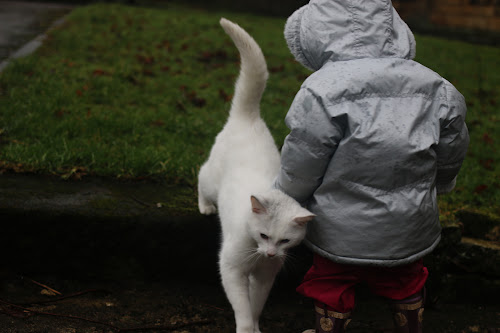 Shortly after these were taken, our entire party including Humuhumu (who was carried in a sling) went on what was billed as "an easy five-mile circular walk". This would have been true had a large section of the trail that meandered along a riverbank not been completely flooded. We were forced to beat a hasty retreat up a steep hillside and onto an exposed and windy ridge. To her credit, Humuhumu endured this cheerfully until we entered the fourth hour (and final mile) of the walk. And then she started crying. She cried for half an hour, which is a record for her. Food, milk and singing, all of which are usually guaranteed to put an end to tears, failed. When we finally returned to the cottage, I fed her two fairy cakes and some hot milk and was rewarded with a forgiving cuddle. Then we went to the pub for a late lunch. A large party of women sat near us asked to borrow her. They sat her in the middle of their table and cooed over her for a good twenty minutes. She smiled benevolently and held out her hands to them in turn, ratcheting the cute up to 11 for her audience.

Having thus conquered Tideswell with the power of Adorable Baby (and incidentally stuffed ourselves full of pie), we returned home to loll in front of the fire. We would have invited the cat, but she'd vanished back into the depths of the churchyard.

This entry was originally posted at http://nanila.dreamwidth.org/913918.html. The titration count is at