I didn't want to say anything about it lest I jinx it before I got too far into it. Now that I've reached Week 6 (and planned Weeks 7 and 8) I feel comfortable announcing that I have started a 52 project. My approach this time will be to select what I think is my best photograph of the week. I started out free-form, but at the moment I'm using reading material for inspiration. At the moment it's The Horologicon by Mark Forsyth, in which the author indulges his passion for reviving obscure and under-utilised words by sorting them according to the hours of the day and their associated "typical" activities.

I've also decided to work in black and white for a while, because I've acquired a new dSLR. It's a significant step for me since I had the same entry-level consumer dSLR for seven years, and now I'm using a camera that, while not full-frame because I don't fancy lugging that kind of weight or responsibility around, is still a big step up from my previous bit of kit. Using black and white forces me to see where I'm making mistakes in focus, exposure and depth of field. I find colour can distract from recognising those errors. Often a photograph that looks interesting in colour becomes extremely dull when the colour is removed, because from a technical perspective it has not been well executed. This isn't always true, of course - the whole appeal of some photographs is in the colour. But with the types of photography that I like to do, portrait and macro, the previously mentioned items are of paramount importance in creating a memorable, striking image.

So, starting with week six, here's what I've done so far. I won't post an update here every week (although I probably will in my favourite DW and LJ communities) - instead I'll do periodic updates like this one. 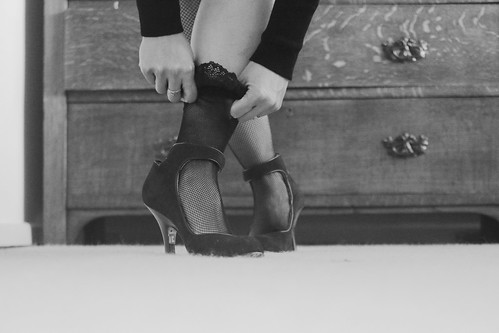 (The word that inspired this is agastopia, defined in the Descriptive Dictionary and Atlas of Sexology as, "a rarely used term for admiration of any particular part of the body.")

This entry was originally posted at http://nanila.dreamwidth.org/911352.html. The titration count is at