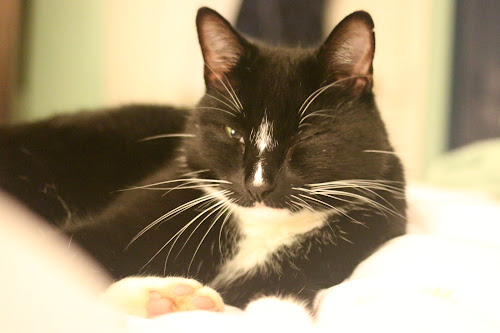 [Image of a winking tuxedo cat lounging in bed]

Hello. I’ve appropriated the journal of my human

ironed_orchid) requested that I describe the manner in which I spend my days. I have graciously agreed to respond.

I’m an early riser. I like to go out for a prowl just as the sky is beginning to lighten. If I’m locked in the house because some idiot has blocked off access to the cat flap, I kindly let them know. Eventually they stumble downstairs mumbling something about, “effing cat” and “unholy yowling,” which I take as an expression of their gratitude for my continued presence in their lives, and open the door.

I spend anywhere from five minutes to three hours outside, depending on the weather, and then re-enter the house and put in the call for breakfast. It is generally served with more mutterings about “not tripping me with your confounded leg-weaving”, which I understand means that they’re honoured to serve me promptly.

I then make a thorough and leisurely tour of the house via the medium of naps during the day. I nap on the sofa. I nap on the day bed in the male human’s study. I nap at the top of the stairs. I nap in the large bed. I nap under the large bed. I nap in the conservatory. If the female human is working from home, I occasionally remind her to take a break for a cup of tea by walking up and down in front of her monitor and jumping on her keyboard. This prevents her from fossilising in front of the computer. It is an act of such magnanimity that I deserve a treat.

The baby human is quite tired when she arrives home in the evening, but she has enough energy while she is having her bath and getting into her pyjamas to provide me with her daily adulation. I approve of this, and encourage it from a safe distance.

After that, it is time for my supper, or diced meat of the finest cuts slathered in gravy, which they call “gooshy food”. I consume this with relish. I return to the front room and deign to sit with them for a time on the back of the sofa, surveying all with slitted yellow eyes. I often have a second prowl as an interlude. Of late I have been having disagreements with my large orange neighbour, Spike, over possession of my garden. These disagreements occasionally leave marks. Having asserted my dominion, I return indoors for my main snooze.

This is a true and faithful account of the manner in which I spend my days. Our very best wishes for the continued health of the human 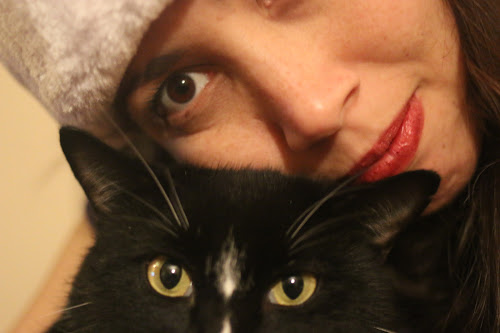 [Image of Telstar and his Santa-hatted human]

This entry was originally posted at http://nanila.dreamwidth.org/906582.html. The titration count is at