The comet ISON is on approach to the sun and has entered the field of view of the long-running SOHO (Solar Heliospheric Observatory) mission. There are some fantastic shots of it traversing towards the sun through a CME (Coronal Mass Ejection) on the SOHO web site. The images were captured by the LASCO instrument on board the spacecraft. Stunning stuff - have a look! 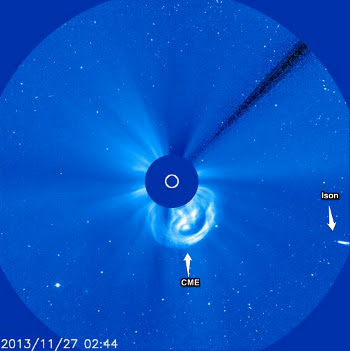 This is LASCO's perspective on the sun and the comet. The sun is in the centre, blocked out so that the instrument can focus on what's going on around the edge of it. If you watch the latest movie on the web site, you'll see a big CME forming on the lower right side of the sun, and then ISON appears from the side and streaks toward the centre.

Images and movies from today's data on the SOHO NASA web site.

ETA 20:50 GMT: It looks like the comet may have broken up at perihelion (closest approach to the sun), as shown in this video by another sun-observing spacecraft, STEREO.

This entry was originally posted at http://nanila.dreamwidth.org/901333.html. The titration count is at