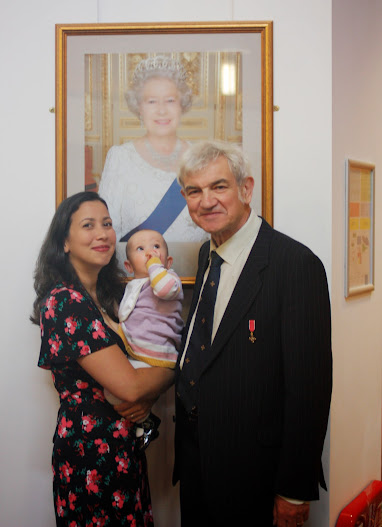 [Image: A newly minted Brit with an experienced crew.]

Today, I became a British citizen.

I spent most of yesterday feeling faintly embarrassed at the prospect. Eventually I worked out that this was because of the ceremony, which struck me as a rather un-British and ostentatious as a concept. Unless, as I suspected it didn’t, the ceremony consisted of going to the pub, sitting around with your mates and having someone walk up with a gin & tonic, clap you on the shoulder, say, “Congratulations, old bean,” in a delightfully plummy accent* and saunter off.

I was right about the ceremony not being that, but wrong about it being ostentatious. I opted to participate in a group ceremony. Eighteen of us queued nervously downstairs in the county hall, then shuffled upstairs and queued again outside the registry room. Finally we were ushered to an orderly semi-circle of chairs to wait quietly in what was effectively a seated queue while Elgar was piped softly to us through the room’s PA system. Laminated placards with the Oath or Affirmation of Allegiance (including polite notice to return said cards at the end of the ceremony) were placed neatly on the chairs. We picked them up and studied them.

A local councillor read a brief history of Worcestershire to us. Most of the content failed to reach my mind, I’m afraid, as it was nervously reciting the Affirmation so I could say it clearly when the time came. The woman speaking had a lovely soothing voice, so I caught a few phrases here and there - Worcestershire sauce, A. E. Housman, the Malvern Hills.

Then it was time for us to speak. Half of the semi-circle stood to read the Oath of Allegiance. This included the other North American (an older white-haired gentleman), the black couple (dressed to the nines - waistcoats were involved), the East Asian family and their three children and the guy in the high-vis vest (more on him later). We applauded them after they had carefully repeated all the words. Then the other half of the semi-circle, including the Middle Eastern, Asian, Chinese persons and me, stood to recite the Affirmation of Allegiance (the God-free version). I felt like my voice sounded out above the others as I was trying to project my voice very clearly, which was later confirmed by my refreshingly honest mother-out-law.

We all stood together to speak the Pledge, in which we promised to uphold British rights and freedoms and to respect British law.

The officiators and other attendees** smilingly applauded us as we grinned at one another, relieved.

We were called up individually to collect our certificates. They used our full names, which, impressively, were pronounced correctly. (Mine wasn’t the longest and most torturous, as I was sure it would be.) A professional photographer took photos of us in front of the gracefully draped Union flag. When he arrived at the chap wearing the high-vis jacket, there was a ripple of laughter as the photographer told him, “Mate, you’re going to have to get rid of that or the photo’s just going to be a big yellow blur.” He removed it, self-consciously straightening the collared shirt that was clearly the one concession to the ceremony he’d made for the two hours he was being allowed off the job to attend, untucking and pulling it down over his paint-spattered jeans so the photo would turn out well.

We were welcomed once more as newly minted British citizens. We stood as an instrumental version of “God Save the Queen” was played to us. Since I have still known this tune as “My Country, ‘Tis of Thee” for far longer, my brain conjured up an exciting and entirely inappropriate mishmash of lyrics that I was immensely relieved not to be singing aloud.

Afterward, we were allowed to take our own photos in front of the flags and photos of the Queen (which we politely queued up to do). Tea and biscuits were also involved.

You might think that after nearly nine years in this country, in which I’ve made a home and had a baby, going through a citizenship ceremony might not make me feel all that different. But it has. It’s a rebirth. This is Day One.

* Accent could be subject to regional requirements, which would be entertaining. In Norfolk, they could for instance say, "Roight, boyo!" Suggestions for other county-specific variants welcome.
**I brought by far the largest number of guests - six, including the out-laws, bloke, Humuhumu and

imyril and her boy.

This entry was originally posted at http://nanila.dreamwidth.org/889369.html. The titration count is at