Regular readers of this journal will know that I occasionally make trips to ESTEC, the large European Space Agency (ESA) site in Noordwijk, the Netherlands. ESTEC is actually in Katwijk, but as Katwijk is a bedroom community for the space agency and the surrounding support companies, visitors to the centre usually stay in neighbouring Noordwijk-an-zee, which doubles as a seaside resort for the Dutch in summer.

It's a lovely little coastal town, 15 minutes on the train (to Leiden) and 40 minutes on the bus from Amsterdam. ESTEC doesn't permit photography on site, so I never end up with any pictures of any of the cool spacecraft models dotted around the place. Neither can I write about the meetings themselves. However, one of the nice things about the place is that after the day is done, you get to return to your cosy hotel in Noordwijk and head out to the promenade for drinks and a nice meal. All my photos from these trips are therefore of beer and beautiful sunsets.

My hands-down favourite place to go in Noordwijk is the Zeemeeuw pavillion. There are several pavillions on the beach, but having sampled each at various points, this is the winner, having the triple virtues of the nicest desserts, the best decor and the largest selection of Trappist beers. The Dutch have cleverly realised that the Belgians know what they're doing when they brew and thus they serve their beer in most of their food and drink establishments.

Plants on the table (with telltale shadows of beer bottles and glasses).

On the rare occasions when the wind is not lashing the coastline, it's possible to take a leisurely evening stroll on the beach without freezing one's extremities. Or, apparently, a bicycle ride. 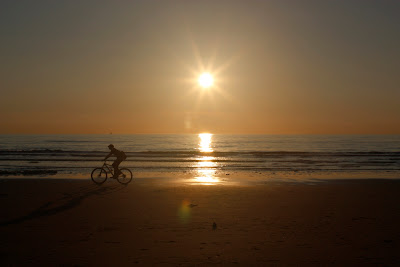 Around the corner from the promenade is a bar that serves a generous American-style burger with lots of bacon and cheese. It also took us on an journey through a random selection of videos from the 70s and 80s, sparking a train of entertaining anecdotes from my similarly music-obsessed colleagues. Between us, we covered several genres (e.g. metal, punk, industrial) in excruciating detail, so I suspect that any outsider eavesdropping on the conversation would have been bored to tears.

The Italian place on the promenade serves cheap delicious pizzas and is very warm inside, a big plus when it's a cold and windy evening as it almost always is in Noordwijk. At the end of our most recent meal there, the server brought us cups full of hot water with little biscuits on the side and plenty of milk and sugar. We regarded it, puzzled, for much too long. (To be fair to us, our meeting had ended at 8 PM and it was now a couple of hours - and beers - later.) When we diffidently called her back to us, she said, "I've just brought you hot water and no tea, haven't I." We stared pathetically at her. "I'll bring you the tea bags now," she said, looking slightly alarmed at our condition.

On my last trip, my flight to Birmingham from Amsterdam happened to coincide exactly with sunset. We saw the sun set twice, and even the most hardened of business travelers were gawping out the windows at it.

It's likely that my next trip to Noordwijk will be in winter. My hope is to get good shots of the statue of Queen Wilhemina inspecting the troops and the lighthouse. I haven't been satisfied with my attempts to date.

This entry was originally posted at http://nanila.dreamwidth.org/888470.html. The titration count is at