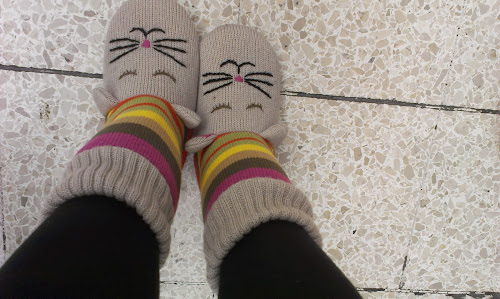 [Image: My feet in some very silly cat booties.]

This photo and the donation I made to the charity Mind today are linked, I promise you.

I bought these slippers a few weeks ago on a Wednesday. I was traveling down to London from Birmingham by train as I do every week for work. I'd walked to the station along my usual path next to the rail tracks. My sartorial choices on this day turned out to be misguided. I'd glanced out the window at 5:30 AM, observed sunshine and put on a dress and trainers. I'd failed to notice that it had rained during the night and that the ground and long grasses were drenched.

I arrived at the station with feet so wet that I had to remove my shoes and walk around in the spare socks I'd brought for the following day. As it was 7:30 AM, there were no shops in the vicinity of New Street or Moor Street stations selling shoes. Even the fashion magazines that come with freebies attached had opted for sunglasses instead of cheap plastic flip-flops. It seemed I was destined to make my journey shoeless until I got to London, so I bought a coffee and went to sit on the train.

On this particular Wednesday, I sat alone at a four-person table in the third carriage from the front with my legs stretched out, sipping my coffee and indulging in some Twitter chatter about my shoeless condition. I'd just managed to convince myself that I would be able to purchase shoes in Marylebone station when the train braked sharply.

And then I felt the bumps.

I squeezed my eyes shut and hoped that they were branches from a fallen tree. We sat motionless on the tracks. A minute passed. I exchanged glances with the woman on the opposite side of the aisle. "I really hope that wasn't what I thought it was," I said. She looked puzzled. "Didn't you feel the bumps?" I asked. "Oh," she said, "Yes."

We waited. The driver came on the tannoy. "I apologise for the delay. There's been a - technical fault."

"What, have the wheels fallen off?" quipped a man behind me. There were a few nervous giggles, but mostly people looked a little sick.

Several minutes passed. The driver returned to the tannoy. "I'm sorry to say that we may be here for some time. A person has fallen under the train and we can't move until the transport police and the ambulance crew have done their jobs. As soon as I know when we can move to the next station, I'll let you know. My apologies for the delay."

The next hour and a half passed mercifully quickly. We watched the stony-faced crews march back and forth past the windows with eyes that had seen too much of this sort of thing. We went to the buffet carriage to stand in a long queue and talk in subdued voices whilst waiting for complimentary cups of tea. We listened to a man who walked up and down the carriages to give us comforting updates, hoping it wasn't the driver. (It was.) Eventually, the train was permitted to continue to the next station, Princes Risborough, where we disembarked to await the arrival of another train to take us to Marylebone. All had been handled in as dignified a fashion as possible - right up until they pulled the train off the platform in reverse. (It hadn't been cleaned yet.)

I participated in a meeting that I was missing by telephone and pretended to be relatively unperturbed by anything other than the inconvenience.

When I arrived in Marylebone station, I discovered that what I'd thought was an Accessorize was, in fact, a card shop. The only shoes they sold were novelty slippers. I had a choice between frogs, monkeys holding bananas and kitties. I chose the kitties, put them on my feet and walked casually down the Tube escalator. No one batted an eyelash until I boarded a train, where a woman across from me with an amused light in her eyes raised an eyebrow as if to say, "Did you forget something before you left the house today?" I felt a lightness inside me, amusement that my biggest personal problem today would be explaining why I was turning up at the office in a pair of fluffy kitten booties. It pushed gently but firmly at the darkness of the day's events.

I don't know why that person jumped in front of that train. I wish that, for her, there had been someone or something who could have made facing that day a prospect that wasn't a step too far. For her sake and for the train driver's, I wore those stupid kitten booties all that day and the next. For her sake and her family's, I made that donation to Mind today. For her sake and for all of us who presently suffer or have suffered from depression, I make this journal entry.

This entry was originally posted at http://nanila.dreamwidth.org/887278.html. The titration count is at