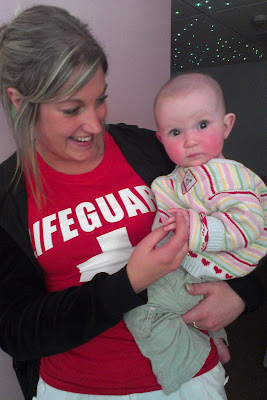 [Image of Humuhumu in khaki trousers and a stripey jumper, being held by a pretty blonde nursery staff member in a red t-shirt.]

On her first day at nursery, Humuhumu had a fabulous time. She’s quite sociable, plays on her own for long stretches of time and will happily eat most things. The big culinary discovery this week was custard. I think she’s wondering why we’d never given it to her previously. She’s even managed to pick up a new trick over the course of her first three days. She now knows how to throw a toy out of her reach and then wait for us to pick it up. It is even more tedious than I had previously imagined.

On Humuhumu’s first day at nursery, her mummy went to the campus cafe to hide behind dark glasses and a large cappucino and pretend not to be crying. She did manage to do a bit of work and to have a long walk, but she went to pick up Humuhumu fifteen minutes early because she couldn’t stand it any longer. 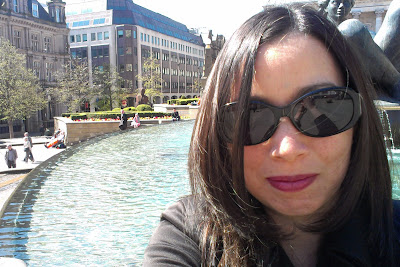 [Image of me with shiny salon hair and dark sunglasses in front of the Floozie in the Jacuzzi, central Birmingham.]

My first day back at work was last Friday. On Thursday, I got my first non-self-inflicted haircut in 18 months, pictured above. On Friday, I got up at 5:30 am to breastfeed Humuhumu and was out the door by 6. I ended up missing the 18:15 on the way back and had to take a later, slower train, so I didn’t get home until 10 pm. However, I had good briefings with colleagues and a tasty pub lunch and I moved my desk to a new office.

Additionally, I took part in the following exchange.

Me, re an ex-colleague: He’s gone to work on software interfaces for a Russian moon lander.
Labmate: In Soviet Russia, moon lands on you!

This is why I missed my work.

I've been going through the photos I took in Vienna and these made a little series. 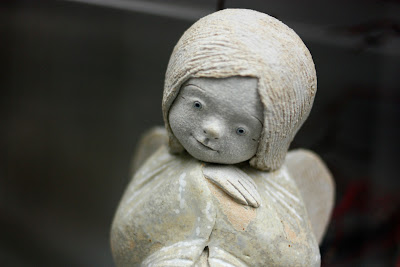 Image of a little stone angel with her tilted head resting on her hands.

And in conclusion, BABY. 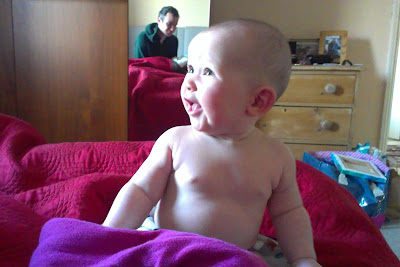 [Image of a shirtless Humuhumu laughing at her daddy, reflected in the mirror of the wardrobe behind her.]

This entry was originally posted at http://nanila.dreamwidth.org/881866.html. The titration count is at