Telstar and Humuhumu have begun to interact. He rubs her while she’s sitting propped up on the floor and she tentatively grips his fur in her hands. He’s also discovered that her hands are often delicious, especially after she’s been having a baby-led weaning session involving yoghurt. He now makes a habit of sniffing her hands to check for tasty treats. 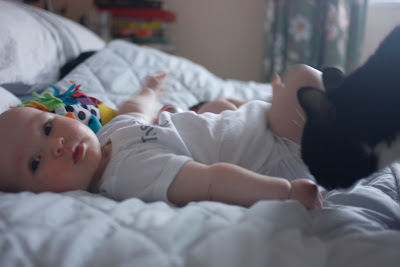 [Image of Humuhumu lying on the bed in her “There’s a nap for that” onesie, being checked for lickability by Telstar.]

Humuhumu is working very hard on trying to crawl now, although her progress has been stymied due to a bad head cold and teething misery. 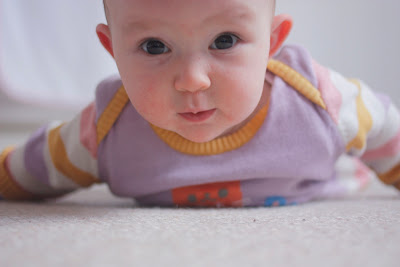 [Image of Humuhumu on her tummy in a new 6-9 month dress (growing so fast, sniff) with her head raised, looking intently at the camera.]

She has been discovering new flavours daily. Last Thursday, for instance, she found out that she likes lemon slices. Also, when you stick them in your eye, you force your parents to beat a hasty retreat from the public venue in which you were consuming them. Last Friday, she found out that cheese on toast is wonderful, especially when you steal it from an inattentive Daddy. 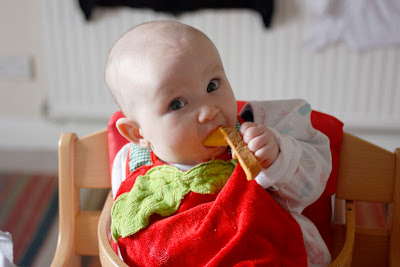 [Image of Humuhumu in her high chair wearing a red apple bib and snarfing down a stolen sliver of cheese on toast.]

This entry was originally posted at http://nanila.dreamwidth.org/878695.html. The titration count is at