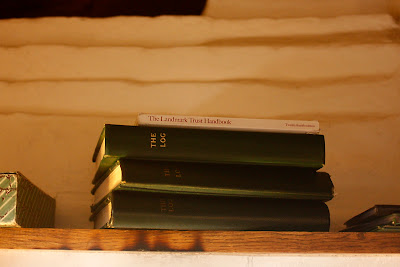 On a shelf above the fireplace sit the three volumes of the St Winifred’s Well Cottage Visitors Log. On our first evening, we got them down and started to read.

Among the earliest entries (11 April 1992) is that of the now-infamous Mrs. Nicholson. Her even cursive densely covers eight full A4 pages and provides a breathtaking illustration of how St Winifred’s might have been viewed by Disgusted of Tunbridge Wells, if that person had been from Edinburgh. If you dropped Mrs. Nicholson in Paradise in autumn, she would take exception to the unraked leaves upon the lawn, turning them into a metaphor for the decline of the Anglican church. The grandiloquent ramblings of an articulate but small-minded self-righteous bigot make nauseating and yet compelling reading. You plow on, hoping she alights on the moment when she realises she’s wasting her time constantly trying to find fault with beauty and with her own good fortune, living comfortably in a land that values its green spaces and preserves its history with such care. But no. Just as you think, “At last! A redemptive sign of sensitivity and compassion,” she finishes it off with a dash of, say, casual racism. Because no one could properly appreciate springtime in a secluded dell when being intruded upon by the Wrong Kind of Pilgrims, could they.
( Collapse )

I won’t do her the honour of transcribing the last half-page of her entry pictured above. Instead, I will simply point out the amusing footnote after her signature and that of her husband - “Alas, poor Mr Nicholson!” Many subsequent entries reference Mrs Nicholson with varying degrees of amusement and horror. There are plenty that pay her no heed at all, but I suspect that none were written without being influenced by it. Perhaps the compulsion to compensate for her painful and verbose review has helped to produce some of the lovelier tidbits, like these sketches.
( Collapse )

Some entries strive to be educational.
( Collapse )

And some are simply charming.
( Collapse )

The log's pages are sprinkled with poetry, quoted and original.
( Collapse )

There are repeat visitors, too. I hope we’ll count ourselves amongst their number in future.
( Collapse )

Mrs Phythian-Adams, who donated the cottage to The Landmark Trust when she realised she could no longer keep it up and couldn’t afford the necessary repairs to restore it, saves up to visit the cottage once or twice a year. Her entries, written in small neat ballpoint script, always include old photos and memories from her life there. Her personal history and her love for the place permeates the logs. Seeking out her entries was a pleasure. I include transcriptions of two of them below.

“November 20th-24th 2006 Here I am on my first birthday in 1938 on the doorstep here. This visit has been wet, wet & very wet. No kingfisher, but not surprising as his perch is above the overgrown watercress so any fish must be out of sight. Rainbows, though, aplenty. In to Oswestry each day for food, fuel & charity shops - Market on Market Day. We have read & been happily lazy. --Margaret & MaryAnne Phythian-Adams & Tess*”
* Tess is the dog.

“September 24th-28th 2012 Very wet, we almost had to swim here & I’ve never seen the stream & pond so full - both the same level. This time I thought Uncle Frank Taylor [photo included] should be remembered. He was brought up in Cumberland, near the Scottish border where his father was Rector of Kirk Andrews. Frank also went into the church & was rector here, West Felton, from 1914-1928 when he died. He it was who acquired St Winifred’s Well & left it to his niece in his Will - she being 19 at the time. She (my mother) went & drove down to Shropshire from the North in her little car, filling it with cottage-y furniture on the way & bringing plants for the garden.

“As usual, MaryAnne & I have done nothing, just enjoyed being here. Tess is getting a bit old for mining, a little dipping here & there. We are booked again next March. --Margaret & MaryAnne Phythian-Adams & Tess”

I wanted to add to the log’s tradition of effortful entries in my own small way, so I sketched the view of Humuhumu in the big bed from “my” armchair by the fire.
( Collapse )

“Our first Landmark Trust property, booked for F’s birthday, and our first as a family of three. (A. pictured above, asleep in the bed aged 16 weeks.) We’ve enjoyed the cold clear nights tucked in the chairs by the fire, reading, dozing and eating by turns. Beware the bog in loose-fitting wellies. Escaped, but only just. Body intact - dignity, not so much.”

We’ll be back with Humuhumu one day.
Read Part 1
Collapse