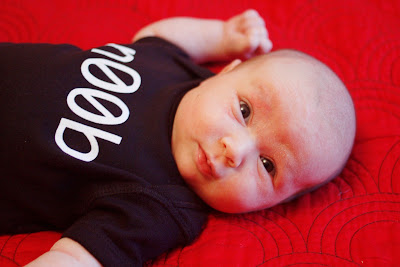 [Image: My daughter in a new black ThinkGeek onesie with "n00b" printed on the front.]

Yesterday was Humuhumu's first big adventure. We went to London on the train and then to my work. She & the bloke then wandered off to the museums while I worked frantically for about three hours. Well, I say the museums. I found them in the pub, so I rather suspect much of the time was spent having lunch with the bloke's friend and charming the bar staff with her big-eyed wonder at the bright lights of the big city.

It was our first time changing her nappy in public, too. I was happy to discover that Marylebone station, in addition to being beautiful, has nice unisex changing facilities so the bloke & I could take our time fumbling around with the change bag.

She was quietly curious, feeding or sleeping for 90% of the trip. The one exception was the bus. Bus journeys with an infant in a pram are a bad idea. Even if the bus isn't rammed, you can't remove the baby from the pram while you're on it - it lurches around too much. Humuhumu is accustomed to being picked up when she cries, which was possible on the train because we had time to get settled in and put the pram away before the train started moving. It wasn't possible on the bus, and the betrayed looks she was giving me as she voiced her disapproval at being left strapped in were as painful to me as the oppressive weight of other passenger's judgment. (I'd forgotten how many miserable gits there are in London.) Future bus journeys, I conclude, will be made with her in her sling. Train journeys, on the other hand, are a golden opportunity for her to make the commuters go all gooey, even large and forbidding-looking gentlemen in suits.
Collapse