Our new house has a couple of west-facing windows, including the one in Humuhumu*'s room, and it turns out that Worcestershire in summertime features spectacular sunsets. I didn't managed to snap them all, but there were four in particular during the past two weeks that merited diving for the dSLR. 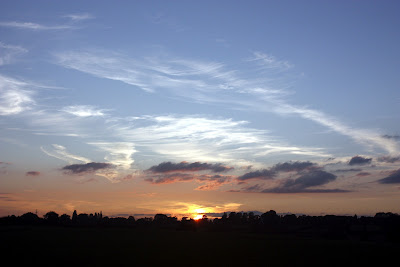 Stratified on the 19th.

I'll make a more organised house post when I've settled into my routine better. At the moment I'm quite anxious about getting things right. Particularly my work-from-home setup and the commute to London, which starts very early on Wednesday and ends late on Thursday and involves multiple trains, buses and coordinating places to sleep. I'm sure it will all come together just in time for me to go on maternity leave and undergo another massive life change.

* Passenger has become Humuhumu, after the reef triggerfish, humuhumunukunukuapua'a, which is the bloke's favourite Hawai'ian word. I would have preferred "Manapua", which is a roast pork bun. Anyway, this began because of our ongoing debate about whether or not Humuhumu is going to have an Anglo first name or a Hawai'ian first name. To Be Continued...
Collapse