I still can’t quite believe we were able to go to St Kilda. It was the highlight of the trip. I suspect it will be a highlight of our lives.

For those who don’t know, and I certainly didn’t until the bloke & I stumbled across it in two books in quick succession (The New Naturalist Scotland book and Kathleen Jamie’s Sightlines), the St Kilda archipelago is the remotest part of the British Isles, 41 miles (66 kilometres) west of the Outer Hebrides. It is no longer permanently inhabited. The last 30 native occupants were evacuated in 1930. Today, the MOD, the National Trust for Scotland and Scottish Heritage assume joint responsibility for maintaining the islands, mostly for conservation efforts.

St Kilda is a World Heritage Site and is possibly Europe’s most essential breeding location for North Atlantic seabirds. (Seabirds formed the major part of the native St Kildans’ diet.) It also plays host to a unique species of mouse and wren (which we saw, but I couldn’t photograph well), and the Soay sheep, which are a primitive breed dating back to the Bronze Age.

To reach St Kilda, you have to either: work for Qinetiq or the MOD, pay to volunteer for a stint on Hirta (the main island) or pay someone to take you there by private hire boat. We selected the last option, as it’s the only way to commit to a mere day trip.

Day 6
We rose at 6:30 AM (although I was awake at 5:30, scared we’d miss our phone alarms and thus the boat), ate a quick breakfast and packed up our tent. We’d been told to arrive at the speedboat that took us to St Kilda no later than 7:45 AM in Leverburgh and though we were a few minutes early, we were the last ones there, so we were ushered quickly on. I was allowed to go on the condition that I remain seated in the cabin for the entire journey, which I did. Of the 12 passengers, three were seasick. I was not one of them. Of the 12 passengers, three were under the age of fifty. The bloke and I comprised two of the three.
( Collapse )

Even by speedboat, it takes three hours to get to St Kilda from Leverburgh on the southern end of Harris Island in the Outer Hebrides. By the time we arrived, we were itching to get walking through the glorious sunshine.

As soon as they would let us after the dinghy ride to the tiny pier, we started to climb up the slope of Hirta, the main island, from the MOD base into realms of the cleitean. These low stone turf-roofed structures were used mainly for food storage and they were all over the St Kildan islands. Presumably cleit-building was a major source of entertainment as well as a necessity, as they appear to be in some rather impractical though aesthetically pleasing places. The isle of Dun can be seen across the harbour in the photo. 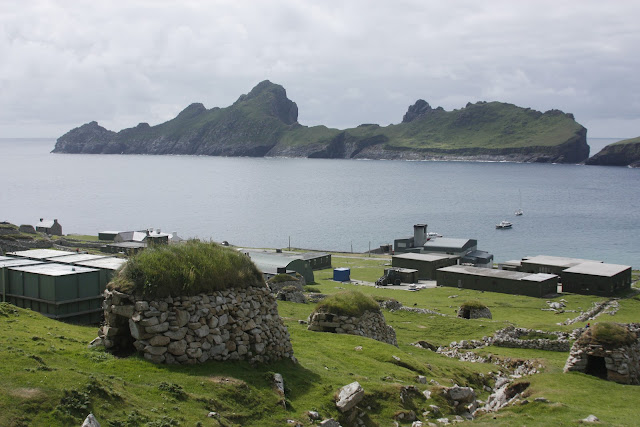 Nesting fulmars and their chick in the cliff. You can probably tell that I’m lying down again to take this photo. 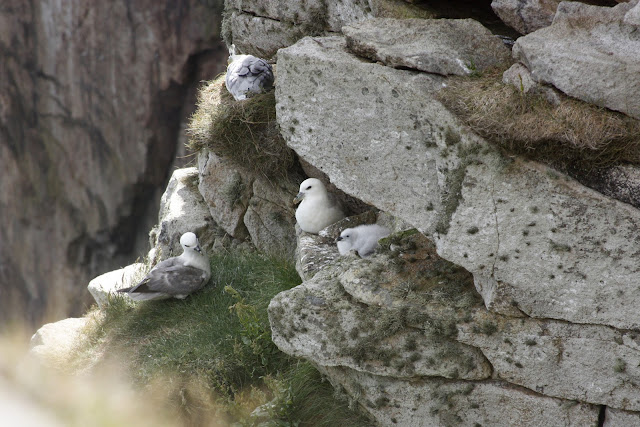 We walked up the edge of the cliff a little way before my pregnant body protested at being hauled any further in a vertical direction, and we stumbled across these rocks. It looks to me as if they’ve been deliberately arranged to reflect the shapes of Boreray and the sea stacs in the distance. 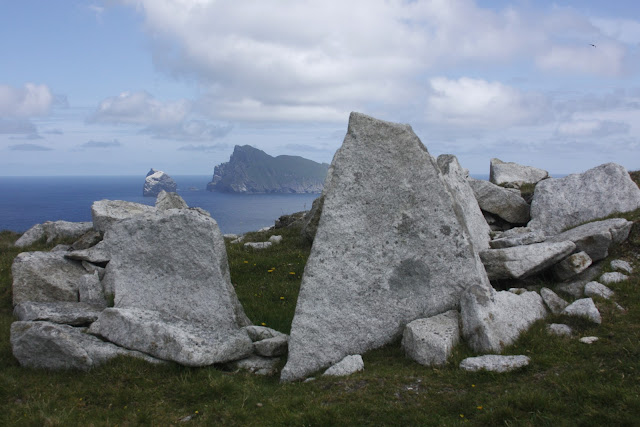 We hiked back down the grassy slope. My only regret on this trip was that I couldn’t manage to walk all the way around Hirta, which we had time to do (3.5 hours). Instead, we visited the little museum and then went to sit out at the edge of the village to watch the flotillas of seabirds - and the seal! - in the harbour.

It occurred to me when we went to the post office to get postcards that it would be good to have at least one photo proving that both of us were there. 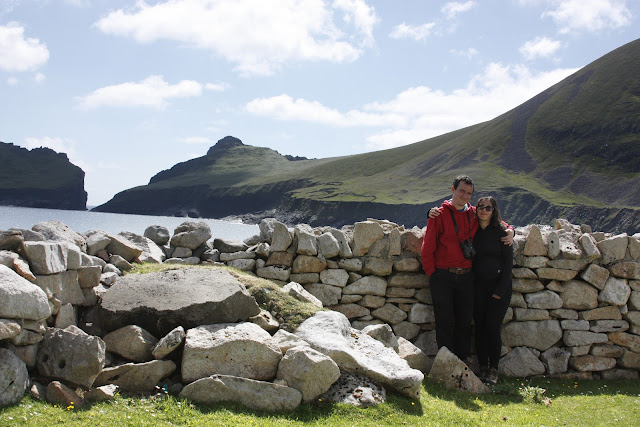 We returned to the boat at 3:30 PM. It’s the one furthest right in the harbour.
( Collapse )

Everyone was exhilarated as we clambered from the dinghy back into the speedboat. The crew met us with cups of tea and generous slices of rum and raisin cake, which we devoured sitting on the deck. I was happy when we set off to circle the other islands and they didn’t ask me to return to the cabin - presumably because I’m still pretty mobile and I didn’t get seasick. This is Boreray and the stacs as we headed toward them.
( Collapse )

I was not prepared for the effect the leisurely boat trip around the stacs was to have on all of us. It was truly like being dropped into a wildlife documentary. Imagine seeing Stac Lee in its 175 metres of glory, which hosts an estimated 6000 breeding pairs of gannets, and then riding straight up to it. It’s overwhelming. The silence - apart from the calling of the birds - was largely unbroken by conversation. 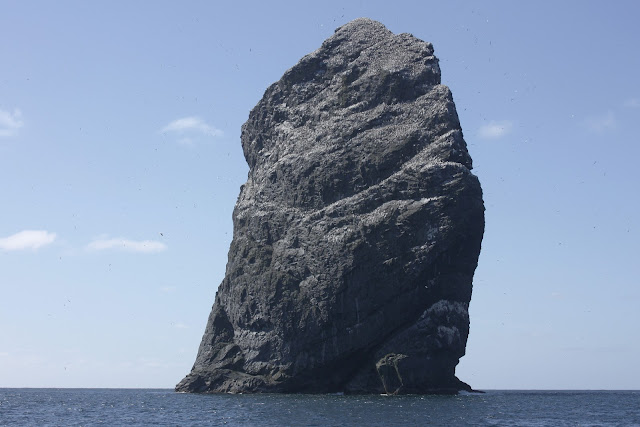 At first we thought all that white was bird droppings. Well, some of it is, but the rest of it is birds. Birds, birds and more birds.
( Collapse )

All those black specks are birds. The noise was phenomenal. So was the smell. 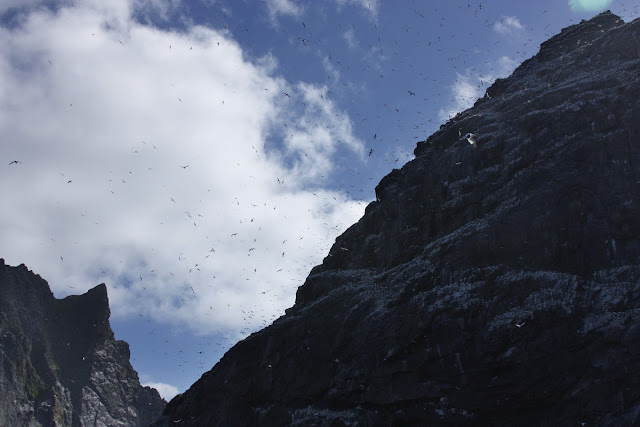 As the sun finally began to dip toward the horizon, we regretfully turned our backs on the stacs and Boreray. No one was seasick on the three-hour journey back to Leverburgh. We were all too worn out from excitement and sun. Most of us fell asleep. 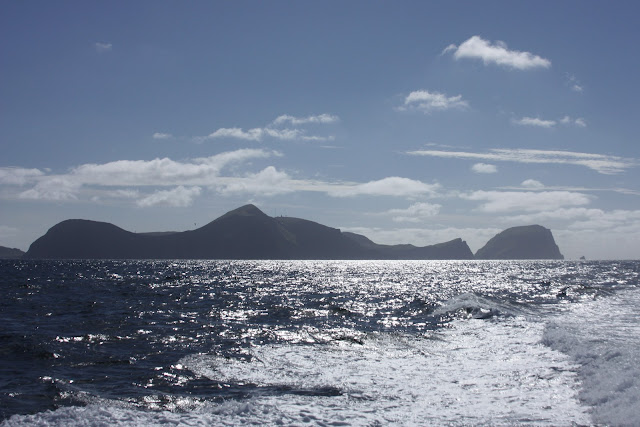 We drove from Leverburgh to Luskentyre to check in at our B&B. Our kind hosts warned us that we should go immediately to Tarbert to find something to eat as there was only one restaurant on the island open past 8 PM, in the hotel. We ate in a state of quiet exhilaration, exclaiming periodically over the day’s observations, before driving back through a glorious sunset. 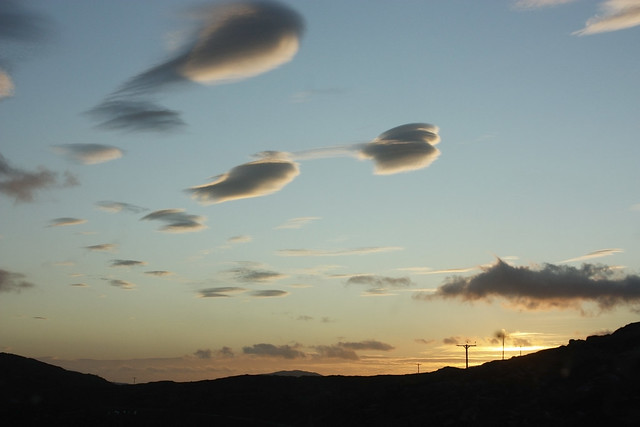